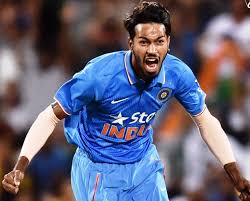 NEW DELHI : India’s sensational display against Pakistan in the Champions Trophy on Sunday included several brilliant individual performances. Yuvraj Singh walked away with the ‘Man of The Match’ award for his quickfire fifty, while Rohit Sharma (91) and captain Virat Kohli (81*) contributed handsomely to India’s cause.

Another notable performance for Kohli’s side came from Hardik Pandya, who was promoted above former India captain MS Dhoni in the batting order. Indian fans were surprised to see Pandya walk out ahead of Dhoni in such a high-profile contest. Pandya put those reservations to rest, smoking three sixes in the last over to help India finish with 319/3.

Interestingly, the Baroda all-rounder had no clue about his batting promotion until the 46th over.”I got to know in the 46th over, when coach told me, ‘You will be going next, go pad up.’ Obviously, I padded up quickly and once I got my gloves, I went out straightaway because Yuvi paa got out,” Pandey told ICC in an interview.
The youngster also admitted to the fact he was under pressure when he walked out to bat.”Honestly I won’t lie, pressure was there. But still at the back of my mind, I was thinking of it as a normal game because I didn’t want to take unnecessary pressure. In any game, I wouldn’t want to take unnecessary pressure on myself because that makes you do something that you are not supposed to do.” Pandya said he was pretty calm and composed out in the middle.
“Even this game, I was keeping pretty normal. I was pretty calm, composed. I tried not to think of it as a big match as well, just take it as a normal game, an important game for India like any match we play. And eventually we did pretty well and won it,” he further added.Kohli was all praise for the his team’s batting performance and made a special mention of Hardik Pandya’s brutal hitting at the end of the innings.Hardik finishing it off was really outstanding. The batting I would say was 10 out of 10,” added the Indian skipper.