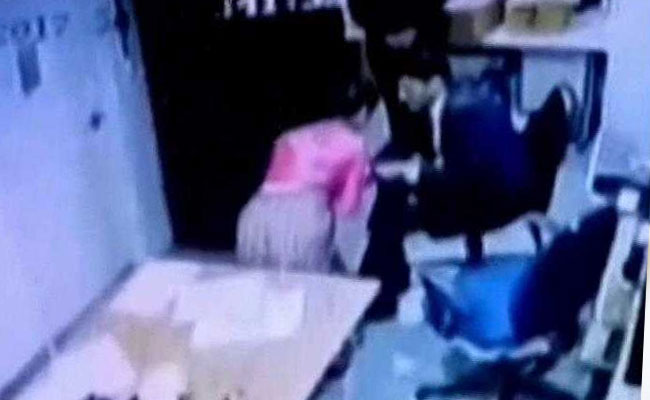 NEW DELHI : A manager at a five-star hotel in Delhi is seen yanking an employee’s saree and dragging her to him in an aggressive act of sexual harassment caught on CCTV camera. The shocking footage from Pride Plaza near the airport has been shared by the 33-year-old woman, who was inexplicably sacked yesterday. The man who assaulted her, the hotel’s security manager, was suspended.
He was arrested today, nearly three weeks after the incident, as the CCTV footage was looped on channels. The security manager had allegedly also grabbed the woman after she left for home, and tried to pull her into his car twice.
Yesterday, when the woman reported for her shift at the guest relations department, she was asked to meet with the Human Resources department. After a 40-minute wait, she was allegedly handed a termination notice. A colleague who had helped her extricate the CCTV footage was also sacked.

“On June 29, my birthday, he called me to his cabin, took out his credit card and asked me what gift I wanted,” the woman told to a TV Chanel. “He told me to sit, and when I didn’t, he pulled me towards him and tried to take off my saree. He told the other colleague to go out of the room.”
While pulling her saree, the executive allegedly kept propositioning her. The woman has alleged that he tried to “get physical” with her and even asked her to spend the night with him in the hotel. She is seen in the video clutching her saree tightly while speaking to him. The woman’s immediate superior, who was seen simply leaving the room in the video, was also suspended, said a hotel spokesperson.

The same night, she says, she reported the incident to the HR department but no action was taken. On her husband’s advice, she filed an FIR or First Information report with the airport police station on August 1. “Based on her complaint and CCTV footage, we have arrested the accused,” said police officer Deependra Pathak.ndtv.