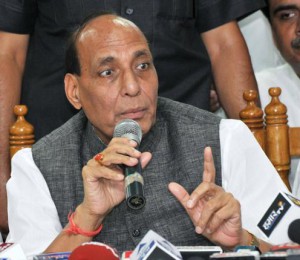 NEW DELHI: Delhi has been put on high alert after the Police received inputs about a potential terror strike in the city by 10 suspected LeT and JeM terrorists. A police source said, the input specifically mentions about 10 terrorists having entered India from Pakistan through Gujarat and that they could carry out a terror strike in Delhi.
On the eve of ‘Maha Shivratri’ festival yesterday, Gujarat as well as other metros and Jammu and Kashmir were also put on high alert with raids conducted at Kutch and other places. Director General of Gujarat police P.C. Thakur said, three NSG teams have been kept on stand by in Ahmedabad while one team has been sent to Somnath temple in Saurashtra. He said, security has been strengthened at vital installations, sensitive areas and at all main temples including the Somnath temple in the state.
Meanwhile, the Gir-Somnath district authorities have postponed today’s cultural event at Somnath temple owing to the terror threat.In the wake of intelligence inputs suggesting some terrorists may have sneaked into Gujarat via the sea route, the Maharashtra Police yesterday issued an alert across the state including its capital Mumbai.
Maharashtra police said, all unit chiefs of the state police have been asked to ensure maximum protection of persons and offices.In view of alert by intelligence agencies of potential terror strike , security has been tightened in Rajasthan also. Rajasthan ATS has issued direction to all range IG and district SP to enhance security. Police has been asked to increase vigil on bus station, railway station, airport and crowded places.
Meanwhile, the Union Home Minister Rajnath Singh today reviewed the internal security situation in the country in the wake of inputs that 10 suspected LeT and JeM terrorists have entered India from Pakistan through Gujarat.
The high-level meeting was attended by top security officials including Home Secretary Rajiv Mehrishi and Director of Intelligence Bureau Dineshwar Sharma. The Minister took stock of the situation and the steps taken to prevent any possible terror attack.
The Home Minister was briefed that four NSG teams have taken position in different locations in Gujarat and would rush to any place if there is any emergency.Mr Singh also reviewed the steps taken to beef up security in strategic locations, religious sites and industrial spots in Gujarat and metro cities apprehending threats.