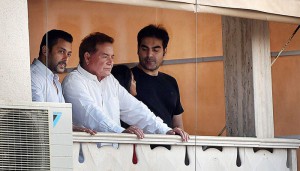 MUMBAI: Two days after he was convicted and sentenced to five years in jail in the 2002 hit-and-run case, actor Salman Khan was today granted bail by a Mumbai sessions court after the Bombay High Court suspended his sentence. In keeping with the HC directive, Salman surrendered before the sessions court and executed a fresh bail bond of Rs 30,000.
Sessions judge D W Deshpande asked the actor to furnish a surety of the like amount within two weeks.The 49-year-old actor appeared much relieved as he left the court for his Bandra home. Hundreds of exultant fans gathered outside the court as the actor arrived to complete the legal formalities.
As Salman, clad in blue denim jeans and a white shirt, came out, the crowd cheered him.Sessions court judge D W Deshpande had on Wednesday sentenced Salman to five years’ rigorous imprisonment, but hours later the high court gave him interim bail for two days.

“Looks like someone up there heard all our prayers,” actor Rohit Roy posted. Actress Ameesha Patel, who visited Salman at his residence yesterday, posted, “So happy to hear the good news that @BeingSalmanKhan has got bail. Prayers of all have been answered.”
As Bollywood heaved a sigh of relief, former Mumbai police Commissioner and now BJP MP Satyapal Singh struck a discordant note.”I had said even yesterday, it is very difficult for the poor to get justice in this country,” Singh said, adding “it is very difficult to punish those who wield influence”.