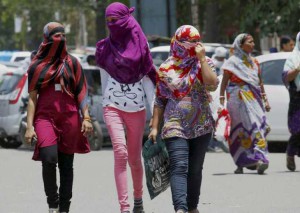 HYDERABAD: Over 110 people have, so far, died due to heat wave in Telangana and Andhra Pradesh this summer. While 66 persons died in various districts of Telangana, 45 lost their lives in Andhra Pradesh.

The Telangana Disaster Management Commission said, the reports of heat wave related deaths continue to reach from various districts as several places across the state recorded maximum temperatures above 40 degrees Celsius. It said, nearly half of the deaths were reported from the worst-hit drought-affected Mahabubnagar district.

Hanamkonda recorded the highest temperature of 41.5 degrees Celsius, while it was 41 degrees in Nalgonda and 40.6 in Ramagundem. Authorities have issued warning to people not to venture into sun especially between 10 am to 4 pm.

In Andhra Pradesh, the maximum of 16 deaths were reported from YSR district, Kadapa, while 11 died in Prakasam district.