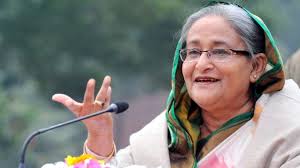 Her recent India visit with an air of welcome everywhere didn’t quite explain her recent closeness with Beijing and India.Her ambiguous diplomacy could not choose a friend in real terms and with whom she should distance her nation from,’’ an intellectual said.

OK China is super power so is India, people need to know why not only India when reaching out to New Delhi is more easy and could be simple as it has been our oldest friend? We could have more advantages both militarily and economically only you need to talk straight, like if recent visit to India paid her off  barring Teesta,’’ he said.
Interestingly, in between India and China diplomatic confusion (who must be chosen as a strategic friend), she allowed massive Saudi fund for over 600 `Model Mosques’ in every district and Police Station.
The fund will come to Islamic Foundation which will build these mosques. “This is again will actually help wahabees (terrorists) as fund leaking out to them is inevitable,’’ fears another Dhaka-based intellectual.Incidentally, Jamaat runs the major banks in Bangladesh which will in banking terms will deal with the funds.

All these elements fetch not only a diplomatic abbeys for Bangladesh but also in the end an uninvited trouble for India. “After all Bangladesh happens to be close neighbour of India, and Pakistan will not like to miss this opportunity to harass India,’’ admitted Bangladesh politician.
It would be foolish on the part of Dhaka to take India for granted, Teesta water may finally reach us, but not the relation once it’s lost,’’ he added.
The Dhaka-based politicians point to Beijing’s angry reactions against India as Tibet’s exile leader Dalai Lama toured Arunachal, “she need to make clear diplomatic choice and get Bangladesh out of this mess,’’ a politician said.