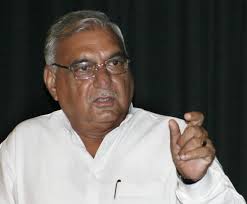 CHANDIGRAH: On Sunday, just after a new Governor took charge in Haryana, Chief Minister Bhupinder Singh Hooda organised an oath-taking ceremony at home and appointed five senior officers. A senior bureaucrat has red-flagged that as unabashed violation of protocol; in his corner is Ashok Khemka, the civil servant who earned national fame by taking on Mr Hooda for allegedly giving sweetheart land deals to Robert Vadra, the businessman son-in-law of Sonia Gandhi, who heads Mr Hooda’s party.
“Lure for post-retirement sinecures harming institutions. New agencies are created to dangle crumbs before pliable bureaucrats and judges,” tweeted Mr Khemka. His stand supports Pradip Kasni, the bureaucrat who has refused to sign the appointment letters issued to the officers inducted by Mr Hooda just two hours after BJP nominee Kaptan Singh Solanki took over as the new Governor of Haryana. Mr Kasni says the officers appointed by the chief minister do not meet the criteria to serve on the state’s Right to Information and Right to Service Commissions which are set up to increase accountability and transparency by helping citizens to access information about government decisions. Important posts are being used to reward cronies, alleges the opposition.
“This is completely unconstitutional. On one hand, a new governor is taking oath and on the other hand, people are being invited home for the oath taking ceremony,” said BJP leader Anil Vij.The Chief Minister claims that he was authorised by outgoing governor Jagannath Pahadia to appoint the commissioners. But the BJP says the new governor’s permission should have been sought.  Commissioners are usually sworn in by the governor, and if Mr Hooda’s action is challenged, these appointments may stand cancelled.