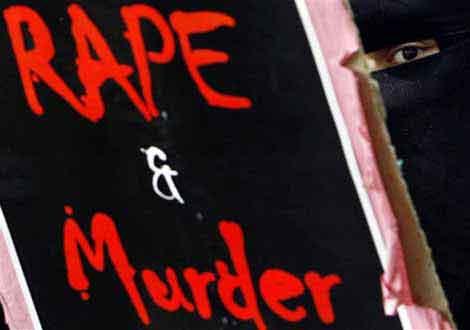 GURUGRAM : In yet another case of crime against women in Haryana, an auto rickshaw driver and two others allegedly gang-raped a woman in Gurugram.When the woman raised an objection, the driver shockingly threw the woman’s nine-month-old daughter out of the auto, leading to the infant’s death.
The incident occurred on May 29.
According to the 23-year-old woman, she was going to her parents’ house in Khandsa village here around midnight on May 29 with her daughter after an argument with her husband. She took a lift in an autorickshaw in which three persons were already sitting. She told the police that the accused started molesting her as soon as she sat in the vehicle.
As she resisted and her daughter started crying, they threw the infant out of the vehicle.The child succumbed to injuries, a Gurgaon police official said.The victim told the police that she was raped by the accused inside the autorickshaw on the old Khandsa road here, close to the Delhi-Gurgaon expressway.

The official said that the woman, a resident of a village near IMT Manesar here, had initially told the police that the accused had thrown her child out of the autorickshaw. However, later she told them that she was raped also by the three. “A case of murder and sexual assault has been registered. We are investigating the matter as woman alleging gang-rape has refused to undergo medical examination,” a senior police officer said. All the accused are absconding.
Notably, the latest incident comes close on the heels of another incident in which two women were allegedly raped at Yamunanagar and Ambala in Haryana, police said. Two horrific incidents of rape also shook Haryana last month. While the body of a 23-year-old woman, who had been gang-raped and murdered, was found on the outskirts of Rohtak, a 26-year-old was gang-raped in a moving car in Gurgaon and abandoned in a semi-conscious state near her house.
(With Agency inputs)