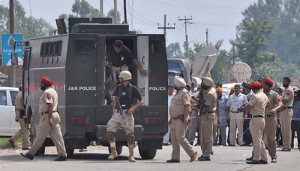 GURUDASPUR: The three terrorists who created mayhem here yesterday before being eliminated were caught on a CCTV camera whose footage surfaced on Tuesday in a significant development in the attack case.
The 14-second video footage shows three men, wearing Army, having big backpacks and carrying AK assault rifles, walking down the road at 4:55 a.M. Yesterday.
The images were captured by a CCTV camera placed at a shop at Taragarh intersection in Dinanagar area, just before they entered this Punjab town bordering Pakistan, SSP Gurdaspur G S Toor said today.
During investigations, it emerged that the terrorists unsuccessfully tried to snatch a mini truck (tempo) from its driver and then opened fire on a moving bus, Toor said.
A man heading to buy vegetables in his Maruti car became their target. The car owner Kamaljit Singh said they pulled him out of his vehicle and threw him on the road.
Earlier this morning, Punjab police defused two grenades seized near the operation site at Dinanagar police station complex.Seven people, including an SP, were among killed in yesterday’s terror strike that lasted around 12 hours.