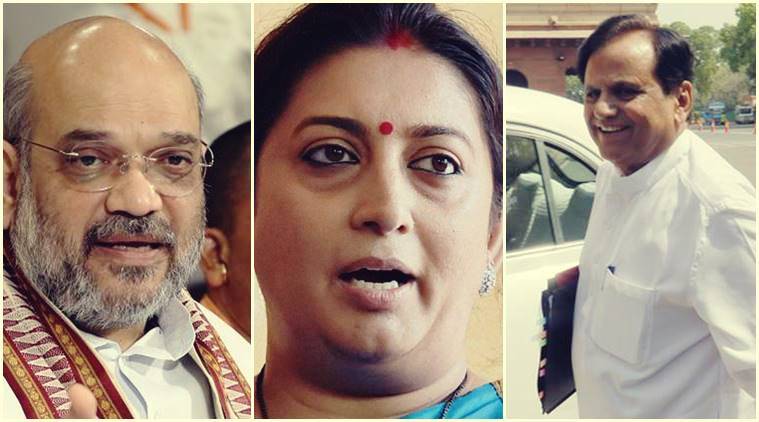 NEW DELHI /GANDHINAGAR :Counting in Gujarat for the Rajya Sabha elections in which Ahmed Patel, the influential political secretary to Congress chief Sonia Gandhi, and BJP president Amit Shah, Smriti Irani and Balwantsinh Rajput are in fray, is put on hold after the Congress party raised the issue of its rebel MLAs showing papers to Shah and demanded action against them for violating election rules.

All 176 MLAs cast their vote. Patel expressed confidence that he will win and muster required 45 votes to sail through his fifth Rajya Sabha election. The elections have turned into a high-stake battle for the Congress in the backdrop of turbulence in the party following the surprise exit of Vaghela and the resignation of six of its MLAs recently.
Patel suffered a blow when former Congress stalwart Shankersinh Vaghela, after casting his vote, told reporters he was against him. “As Ahmed Patel is going to lose, I have not given my vote to him,” Vaghela said.  The Congress has asked the Election Commission to invalidate the vote of two of its legislators who, after showing their ballot papers to the Congress election agent, also showed the BJP’s agent how they had voted, which the party said violates polling norms.

Senior BJP leaders including several union ministers, too approached the Election Commission to counter the Congress’s objections. “Since morning the Congress has been claiming it will win, but now, with defeat staring them in their face, they are making desperate attempts,” said minister Ravi Shankar Prasad.

Ahmed Patel, was counting on 44 of the Congress’ 51 MLAs to support him – the others seen as loyalists of rebel leader Shankarsinh Vaghela. But one of the 44 is confirmed to have voted too against him. This means he is now depending on Chhotubhai Vasava, the lone Janata Dal (United) legislator and one of two MLAs from Sharad Pawar’s Nationalist Congress Party (NCP); the other said he would voted for the BJP. Mr Vasava told  he has voted for Ahmed Patel but his party said he has voted for the BJP.

Less than an hour into voting, Shankersinh Vagehla called the election, declaring Ahmed Patel defeated. Mr Vaghela, seen to have scripted a rebellion in the Congress as revenge for the party sidelining him, said Mr Patel would “not even win 40 votes.” He confirmed he had voted against Mr Patel, saying, “Who will vote for a losing candidate.
Mr Vaghela had exited the Congress two weeks ago and soon after six Congress MLAs resigned, three of them joining the BJP. One of them, Balwantsinh Rajput, is the BJP’s third candidate today against Mr Patel and a relative of Mr Vaghela.The six who resigned couldn’t vote and that brought the strength of the 182-seat Gujarat Assembly down to 176. To win a candidates has to win 45 first preference votes – which means they have to be the first preference of 45 Gujarat legislators each.

45 of the BJP’s 121 MLAs will choose Amit Shah as their first preference, 45 will choose Smriti Irani, and the remaining 31 will choose Balwantsinh Rajput. . Mr Vaghela’s son Mahendrasinh Vaghela, a Congress MLA, touched Amit Shah’s feet when he went into the Gujarat secretariat to vote.

The Congress wants to prevent a possible defeat for Ahmed Patel today as being seen as a loss of face for Sonia Gandhi. Both he and his party stress that his important party role has nothing to do with today’s election. A defeat for Ahmed Patel will also severely dent the morale of the Congress ahead of assembly elections in a state where it has steadily lost ground to the BJP in the last two decades.

Meanwhile,Senior BJP leaders on Tuesday approached the Election Commission demanding immediate counting of votes in the Rajya Sabha election in Gujarat. Counting of votes for the three Rajya Sabha seats in Gujarat was delayed as the Congress moved the Election Commission demanding cancellation of votes of two of its legislators who cross-voted and allegedly displayed their ballot paper to the BJP’s polling agent.
Election Commission officials did not meet Congress, BJP delegations for the third time; officials are in closed door meeting right now. We want electoral process to be completed and counting to begin: Union Commerce Minister Nirmala Sitharaman urges Election Commission. Have full faith in Election Commission; Congress’s allegations have no substance and they are giving wrong precedents, says Ravi Shankar Prasad after meeting EC again.
Congress leader P Chidambaram claims, “There is enough evidence that the ballot paper were seen by people other than those authorized”Election Commission must reject these ballot papers as it did in Haryana in June 2016: Chidambaram
Deputy Chief Minister Nitin Patel says the Election Commission will take a call on the Congress’s demand for invalidating votes of two of its MLAs who claimed to have voted for BJP nominees. He alleged that the Congress was raising “non- issues” as the opposition party has “sensed defeat”.
A delegation headed by Union Finance Minister Arun Jaitley tells the EC that under Article 324 of the Constitution no authority can interfere with election process once the voting is completed and the ballots are put inside the box.