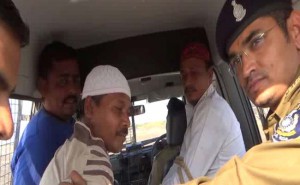 AHMEDABAD:Men playing the part of terrorists in an anti-terror drill in Gujarat were made to wear skull caps, triggering outrage over the assumption that terrorists are Muslims.
The drill was carried out by the Surat police on Saturday; the video came to attention today in local media. During the exercise to check the preparedness and response of the police, officers were asked to catch a fleeing terrorist. After dummy firing, the two “terrorists” were arrested.
“Mock drills were carried out in 10-15 locations. This should not have happened; it was an avoidable mistake. We assure you that if someone deliberately made the mistake, we will take action against them,” said Deputy Superintendent of Police Pradeep Sejul.
Members of the BJP’s minority cell in Gujarat have objected to the incident. Mehboob Ali of the party said that the police had stereotyped a community.