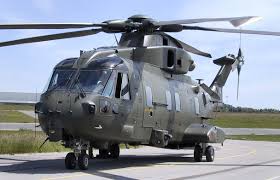 NEW DELHI: Government has said, it will leave no stone unturned to bring to justice the corrupt and wrong doers in the Agusta Westland Chopper deal.
In a clarification, the Defence Ministry said in New Delhi that corruption is the core issue in the case and the corrupt will be brought to book.
Recently, an Italian court had observed that there is a reasonable belief of corruption in the chopper deal. The deal is related to purchase of 12 helicopters for VVIPs from Italian manufacturer, Finmeccanica during the UPA rule.
BJP Chief Amit Shah launched a scathing attack on Congress President Sonia Gandhi over the deal yesterday. He asked the Congress President to reveal the names of those who received kickbacks in the scam.
Congress has demanded that the CBI inquiry should be stepped up in the case. Party leader AK Antony said, the truth should come out and the middleman be punished.
“Publicly available information on the procurement of AgustaWestland helicopters clearly shows that the core issue in the matter is corruption,” a statement from the Ministry of Defence said.
The statement said the time taken in the investigations was largely because “some of the key perpetrators of this misdeed are outside the country”.The 2010 deal is hogging the headlines in the media once again after an Italian court recently overturned a previous ruling and sentenced the former chief executive of Italian defence company Finmecannica SpA to jail after findinghim guilty of corruption in connection with the case.
Italian prosecutors alleged that Mr. Giuseppe Orsi, the then CEO of Finmecannica oversaw a plan to pay huge bribes to Indian officials and politicians so that its subsidiary AgustaWestland could win the contract for supply of 12 AW101 helicopters for the use of VVIPs.  The deal with AWIL was signed on February 8, 2010.

The latest reports from Italy have led to charges and countercharges by the ruling Bharatiya Janata Party (BJP) and the Congress, which was in power when the deal was signed, and led to disruption of proceedings in Parliament.
Congress President Sonia Gandhi and several of her senior colleagues, including her Political Adviser Ahmed Patel, both of whose names figure in the media reports, have come out and said the allegations were false and baseless.
They said an impartial probe would help establish the truth. The Ministry of Defence statement said.It said the contract of February 8, 2010 was terminated with effect from January 1, 2014.
“The main reason was breach of the provisions of the Pre-Contract Integrity Pact and breach of terms of contract by AWIL. However, the company was not debarred by the said order. Various bonds and bank guarantees were invoked,” it said.
The statement said it was the present Government which, through its order of July 3, 2014, put on hold all procurement and acquisition cases in the pipeline of six companies figuring in the FIR registered by the Central Bureau of Investigation (CBI) — Agusta Westland International Ltd., UK, Finmeccanica, Italy and its group of companies, including subsidiaries and affiliates, IDS, Tunisia, Infotech Design System (IDS), Mauritius, IDS Infotech Ltd., Mohali and Aeromatrix Info Solution Pvt. Ltd., Chandigarh.
“This proposal was approved on 2nd September 2011 based on an application by Indian Rotorcraft Ltd., a joint venture of Tata Sons with Agusta Westland NV, Netherlands.
The statement said that, on the core issue of corruption, the two concerned agencies, CBI and Enforcement Directorate (ED), were  vigorously pursuing all aspects of the investigation, including the arrests and/or extradition of three foreign nationals — Carlo Gerosa, Guido Haschke Ralph and Christian Michel James.
“Red Corner Notices were issued in December 2015 and January 2016 through Interpol under Prevention of Money Laundering Act and Prevention of Corruption Act.
Extradition request has also been made for Mr. Christian Michel James. One of the agencies (Enforcement Directorate) has arrested an Indian national and attached approximately Rs. 11 crore of property belonging to Indian nationals and to Mr. Christian Michel James,” the statement added.
India had decided to acquire the 12 three-engine AW101 helicopters for the Indian Air Force’s (IAF) Communication Squadron, which ferries the President, the Prime Minister and other VVIPs.