Govt ready to discuss any issue but one family believes it is above the law: Pradhan 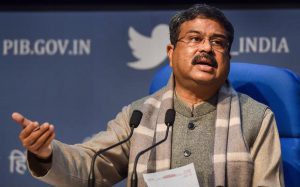 NEW DELHI: Union Minister Dharmendra Pradhan on Saturday hit out at the Congress party for creating ruckus in Parliament and staging protests against the ED for questioning Sonia Gandhi. He said the government was ready to discuss any issue in the House but the opposition was running away as its aim was to disturb the proceedings. Ever since the monsoon session began on July 18, Congress has been demanding a debate in Parliament on price rise and inflation.
Pradhan said the government was ready for a debate inside the Parliament on any issue. “But one party and one family believe it is above the law. So, they are not letting the Parliament function,” he said in an exclusive conversation with Times Now.
Pradhan also rejected the charge of arrogance by the opposition and said that the Congress leaders feel only they should run the country. He also referred to the way Sonia Gandhi reacted outside Lok Sabha when asked about Adhir Ranjan’s comment on President Murmu. Gandhi had said that Adhir Ranjan had apologised (maafi to maang liya hai) for calling President Murmu ‘Rashtrapatni’. “Is this the way…they think ruling the country is their inheritance,” Pradhan said.
When asked about the opposition’s allegations that the ED and CBI were targeting their leaders, Pradhan said that the central agencies were acting under the directions of the courts. “The CBI and ED are acting on court-directed inquiry. But some people think they are above the constitution and the law,” he said.
The minister referred to Partha Chatterjee’s case, which began after the Calcutta HC ordered a CBI probe into the teacher recruitment scam. He also referred to the National Herald case, in which Sonia Gandhi and Rahul Gandhi are facing a probe by ED and CBI. The probe is also based on the directions by the courts.