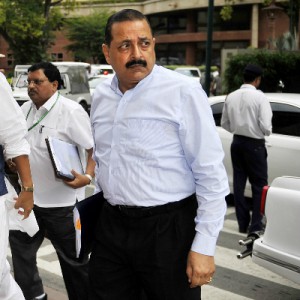 JAMMU: The Centre has exhorted bankers to work towards surpassing the target of bringing 10 crore people under the ambit of the three social security schemes launched by Prime Minister Narendra Modi on Saturday, before the end of this month.
“The bankers must ensure maximum coverage upto May 31 so that the national target of enrolling 10 crore population in the country is not only achieved but surpassed,” MoS PMO Jitendra Singh said in Jammu Singh, who launched the three social security schemes — Pradhan Mantri Jeevan Jyoti Bima Yojana (PMJJBY), Pradhan Mantri Suraksha Bima Yojana (PMSBY), and Atal Pension Yojana (APY) — in Jammu last evening, asked the bankers to enrol their existing and new customers in the schemes.
“The bankers must enrol their existing and new customers for Pradhan Mantri Suraksha Beema Yojna and Pradhan Mantri Jeevan Beema Yojna as the premiums for accidental and life insurance coverage in these schemes is just Rs 12 and Rs 330 per annum respectively which happens to be the lowest and affordable by vast section of the people across the country,” he said. MP and senior BJP leader Jugal Kishore, Minister for Social Welfare Bali Bhagat, and Minister of State for Finance Pawan Gupta were also present on the occasion.
Singh said that these welfare schemes are an extension of ‘Jan Dhan se Jan Suraksha’, aimed at broadening the ambit of social security measures for one and all in the country. Various banks had put up stalls for on-the-spot enrolment and counselling of the new customers.