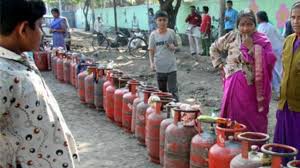 It will provide access to clean cooking and preserve the health of women and families. Mr Pradhan said the decision will fuel Make In India in petroleum sector, and will also create lots of jobs. He said the scheme is a boost for women’s health as it brings free LPG to poor families that suffered the curse of smoke while cooking.

CCEA has also approved policy for grant of extension to Production Sharing Contracts, PSCs for small and medium sized discovered fields. The policy deals with 28 fields and will grant extensions in fair manner and enable companies to take investment decisions on reserves. CCEA also gave its nod to proposal to grant marketing including pricing freedom for gas from High Pressure High Temperature, Deep water and Ultra Deep water areas.

The marketing freedom will be capped by a ceiling price arrived at on basis of landed price of alternative fuels. It will help in incentivizing production of natural gas in country and help in enhancing country’s energy security. In a boost to firms like ONGC and Reliance Industries, the Cabinet today approved a new price formula for their undeveloped gas discoveries in difficult areas. This will lead to a near-doubling of rates.
According to Oil Minister Dharmendra Pradhan the price will be the lowest of weighted average of fuel oil and imported LNG or weighted average of fuel oil, naphtha and imported coal. Pradhan said, the new price will apply to undeveloped gas discoveries and not on currently producing fields.
With the current rates, the price of gas will come to 7 dollar per million British thermal unit (mmBtu). Gas price in India is currently at 3.82 dollar per mmBtu, which will fall to 3.15 dollar in April. Since this rate is not enough to incentivise exploration, the government approved the new price formula for undeveloped gas discoveries in deep-sea, ultra-deep sea and high-temperature, high-pressure areas using average of landed price of naphtha, fuel oil and liquefied natural gas (LNG).
About two dozen discoveries of the state-owned ONGC, Reliance Industries and the Gujarat State Petroleum Corporation (GSPC) in KG Basin alone are languishing for want of right price.
Government today cleared a proposal to amend the Mines and Minerals (Development and Regulation) Act to include the provisions of allowing transfer of captive mines granted through procedures other than auction.
The step will help in checking the stressed and non-performing assets of banks by allowing them to liquidate the same where a firm or its captive mining lease is mortgaged. It will also spur mergers and acquisitions (M&As) in the sector. The MMDR Act, passed by Parliament in March last year, allows transfer of mining leases only in cases where the mine has been acquired through auction.

The Cabinet today also approved new hydro carbon exploration and licensing policy. It will be uniform licensing policy for award of hydrocarbon acreages with new contractual system and fiscal model. The new policy will usher a new era in exploration of hydrocarbons in the country. Petroleum and Natural Gas Minister Dharmendra Pradhan said, the decision aims to take Indian hydrocarbon sector to new levels globally.
Cabinet also approved amendment to Mines and Minerals (Development and Regulation) Act 1957 to allow transfer of captive mining leases not granted through auction. The transfer of captive mining leases, granted otherwise than through auction will allow mergers, acquisition and ease of doing business.
Cabinet also gave its nod for signing and ratification of BIMSTEC Convention on Mutual Legal Assistance in Criminal Matters. BIMSTEC comprises seven countries Bangladesh, Bhutan, India, Myanmar, Nepal, Sri Lanka and Thailand. It also approved creation of an Indian holding company of M/S Dubai Port World with unique asset portfolio.
Cabinet approved MoU with International Monetary Fund, IMF for setting up of South Asia Regional Training Centre by IMF to help in capacity building of Government officials. Cabinet also approved MoU between India and Bahrain on cooperation for prevention of human trafficking especially trafficking in women and children. Cabinet also gave its ex-postfacto approval for MoU between India and United Arab Emirates on Technical Cooperation in Cyber Space and Combating Cyber-Crime.
Cabinet approved proposal to remove minimum capacity utilisation criteria for Single Super Phosphate manufacturing companies. The companies had to use a mandatory 50 per cent of production capacity or produce 40 thousand MT per year to become eligible for subsidy. The manufacturers had been representing for relaxation in order to allow them freedom of production as per market conditions. The decision will help increasing domestic production of Single Super Phosphate and reduction in prices to farmers and savings in subsidy.