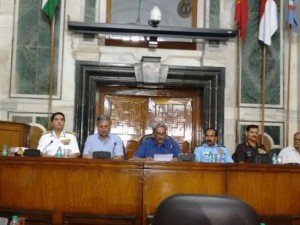 NEW DELHI: The government today announced the implementation of the long-awaited One Rank One Pension or OROP scheme which was rejected by veterans who have vowed to continue their protest.
Fulfilling one of its major election promises in the run up to the Lok Sabha elections of the BJP, Defence Minister Manohar Parrikar on Saturday announced the implementation of the long delayed One Rank One Pension (OROP) for ex-servicemen.
The avowed aim of this announcement, to end the strike by veterans demanding OROP was however hanging in fire with protesting veterans rejecting the “unilateral” announcement as it “dilutes” several core issues from the accepted definition.
“Despite the huge fiscal burden, given its commitment to the welfare of ex-servicemen, the government has taken a decision to implement the OROP,” Mr. Parrikar while announcing the plan, and said the ministry of defence would soon issue a detailed government order.
Mr. Parrikar said 2013 would be taken as the base year for calculation and it would be implemented from July 1, 2014 the earliest date after the government assumed office. Equalisation of pensions would be done every five years as against the usual practice of once a decade.
As per definition OROP implies uniform pension be paid to the armed forces personnel retiring in the same rank and length of service regardless of their date of retirement.
“Under this definition, it has been decided that the gap between rate of pension of current pensioners and past pensioners will be bridged every five years,” Mr. Parrikar said.
This has been the key issue of disagreement between the government and the veterans who wanted annual revision in line with the definition. Arrears would be paid in half-yearly instalments, however, all widows would be paid in one instalment.

While OROP would be applicable for the disabled and war widows, those opting for voluntary retirement and not complementing full service will be out of its ambit.
This has raised a new point of disagreement between the veterans and the government. Mr. Parrikar said the government would give details on the voluntary retirement in the government order. Asked if the decision would be acceptable to the veterans, Mr. Parrikar said, “I want the veterans on board on all issues”.
Veterans react
Responding to the statement, ex-servicemen while thanking the government for implementing the scheme rejected the modalities. They have been demanding an annual revision and implementation from April 1, 2014. “The government has taken a decision, this is what we can give,” added Minister of State for Defence, Rao Inderjit Singh.
To address complexities and sort out inter-services issues the government will appoint a one member judicial commission which will give its report within six months. The veterans in turn demanded a five member directly under the Defence Minister and the report submitted within one month.
Given details on the cost of OROP to the exchequer, Mr. Parrikar stated that it would cost between Rs. 8,000-10,000 crore at present which would increase in future. The expenditure on arrears alone would be Rs. 12,000 crore. Currently the pension bill of the defence ministry stands at Rs. 54,000 crore.
There are about 2.45 million veterans and six lakh war widows who stand to benefit from the scheme.
All about OROP: