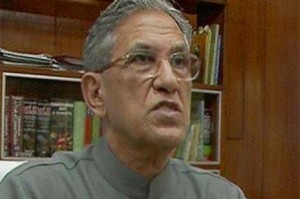 NEW DELHI : Uttar Pradesh Governor BL Joshi today resigned amid swirling reports that Prime Minister Narendra Modi’s government wants to replace UPA appointees.Reports suggest that Assam Governor JB Patnaik, West Bengal Governor MK Narayanan, Karnataka Governor HR Bhardwaj and Rajasthan Governor Margaret Alva will also quit in the next 24 hours.
“If I were in their place, I would have resigned,” said Home Minister Rajnath Singh, referring to governors selected by the Congress that have more than two years left in office and are on the to-be-removed list of the new government.
Among them is Sheila Dikshit, who was posted as Governor of Kerala in March after she led the Congress to an abysmal third place in the December state election in Delhi, ending her three-term tenure as Chief Minister on a crashing note.Sources say that Mr Modi’s government has sent “feelers” to Ms Dikshit about surrendering her post, but she has refused to comply, and could therefore find herself transferred to a smaller north-eastern state.
“I can’t react to rumours,” Ms Dikshit said when asked about reports that she was under pressure to quit.While the government is keen on asserting its prerogative to select Governors, it is inclined to spare those who have just a few months left before their term expires.
The opposition Congress alleges an abuse of power. “Why are they worried about changing governors?” said the party’s PC Chacko.
In 2004, the UPA government’s decision to axe BJP-appointed governors led to a major political showdown. A BJP MP moved Supreme Court, which ruled in May 2010 that governors were not employees of the union government and cannot be removed “in an arbitrary and capricious manner with the change of power.” The court said a governor can be replaced only under “compelling” reasons of misconduct or any other irregularity.
The escalating controversy over governors comes as the Prime Minister’s Office has stopped eight ministers from appointing as their private secretaries top bureaucrats who had worked for UPA ministers.