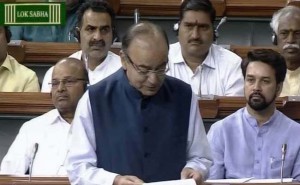 NEW DELHI: Government has withdrawn proposal to tax employee provident fund withdrawals. Making a statement in the Lok Sabha, Finance Minister Arun Jaitley said tax proposal for National Pension Scheme has been retained. He also clarified government’s stand on Employees Provident Fund (EPF) in the House.
Minister Arun Jaitley has announced that he is withdrawing his Budget proposal to tax Employees’ Provident Fund or EPF withdrawals. Mr Jaitley announced the roll-back in a short speech in the Lok Sabha on Tuesday morning. The government would like to conduct a comprehensive review, he said.
The tax, announced in the Union Budget last week, has been criticised not only by the opposition, but also affiliates of the ruling BJP’s ideological mentor, the RSS, like the Bharatiya Mazdoor Sangh or BMS.Prime Minister Narendra Modi is reported to have suggested that the EPF tax be deferred for now, while the proposal is minutely reviewed.
In the Union Budget presented last week, Mr Jaitley had proposed that after April 1 this year, 60 per cent of the amount deposited in the EPF account of the employee would be taxable at the time of withdrawal, and 40 per cent would be tax free.
The provision said that if the employee re-invested 60 per cent of the EPF in an annuity or pension fund then it will not be taxed.  Currently, the entire amount is tax free at the time of withdrawal if the employee has completed five years of continuous service.
The Congress held protests and had demanded an immediate and full reversal of the Centre’s proposal.
A day after the Budget, the Finance Minister had explained the EPF proposal to party lawmakers and had said that any decision to reverse it would be taken by the Prime Minister.Mr Jaitley has said that the idea behind the EPF tax is to create a pensioned society, especially among employees in the private sector who have no provision for pension.
would affect only high earners in the private sector – about 60 lakh of the 3.7 crore people who contribute to the EPF – who it claims have used the EPF scheme to evade taxes.The EPF is a retirement benefit scheme for salaried employees. Any company with over 20 employees is required by law to register with the Employees’ Provident Fund Organisation (EPFO).