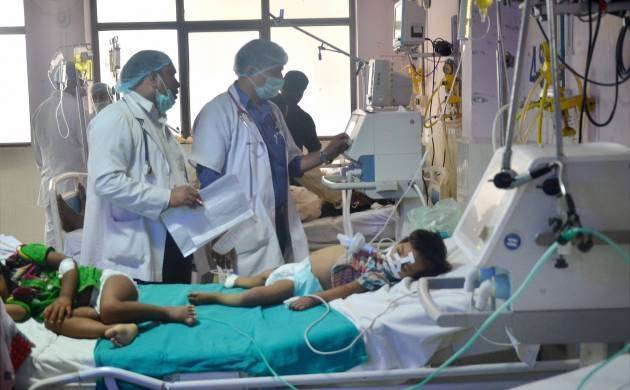 LUCKNOW : Uttar Pradesh Police have arrested the proprietor of Pushpa Sales — which supplied oxygen to the state-run Baba Raghav Das Medical College, where dozens of children died last month — from Gorakhpur on Sunday. According to reports around 60 children including infants had died at the government hospital in Uttar Pradesh Chief Minister Yogi Adityanath home constituency within a week in the month of August.
Investigating team in its report to the Uttar Pradesh chief minister had said that the deaths occurred due to lack of oxygen. Senior superintendent of police Gorakhpur, Anirudh Siddharth Pankaj said, “Manish Bhandari, proprietor of Pushpa Sales was arrested from Deoria bypass.”

More than 60 children, mostly infants, had died at the hospital within a week in August.There were allegations that the deaths occurred due to a disruption in oxygen supply over unpaid bills to the vendor.The State government had vehemently denied that shortage of oxygen led to the deaths. With the fresh arrest, all the nine persons named in the FIR have been sent to custody.

“Manish Bhandari, the proprietor of Pushpa Sales was arrested by the Gorakhpur Police at around 8.00 a.m. from Deoria bypass road,” Senior Superintendent of police Gorakhpur, Anirudh Sidhartha Pankaj told PTI. The SSP said Bhandari’s medical examination is being conducted and subsequently, he will be interrogated. “Later he will be produced in a local court,” he said.

According to police sources, Mr. Bhandari was absconding for a long time . On September 15, the anti-corruption court had declared Mr. Bhandari as an absconder, and issued orders to attach his properties.
Pushpa Sales was the former oxygen supplier to the medical college.

In its report submitted on August 23, the committee under U.P. Chief Secretary Rajive Kumar probing the hospital tragedy had recommended initiating criminal action against then principal of the BRD Medical College Dr. Rajiv Mishra, HoD Anaesthesia Paediatric department Dr. Satish, in-charge of 100-bed AES ward Dr. Kafeel Khan and Pushpa Sales.
U.P. Chief Minister Yogi Adityanath had constituted the committee under the Chief Secretary on August 12, a day after deaths of scores of children in the State-run hospital. (With Agency Inputs).