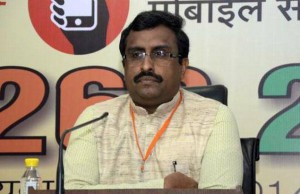 NEW DELHI: The row over union Minister Giriraj Singh’s remark on Congress president Sonia Gandhi’s skin colour has ended as the minister has clarified, the BJP said on Thursday.

Bharatiya Janata Party (BJP) national general secretary Ram Madhav told reporters: “Giriraj Singh has clarified about his comment, matter ends.”
Mr. Singh, who has stoked controversy in the past as well, told reporters in Patna on Tuesday that he wondered if former prime minister Rajiv Gandhi had married a woman who was not white-skinned, would the Congress have accepted her as its president.

“If Rajiv Gandhi had married a Nigerian and if she wasn’t white-kinned, would the Congress accept her as a leader,” he said.
Following the outrage triggered by his comment, Mr. Singh on Wednesday expressed regret and said his remarks were made during an off-the-record conversation.
“During off-the-record conversation, there is talk of different kinds. If Sonia ji or Rahul ji have been hurt by my remarks, I express regret,” he said.