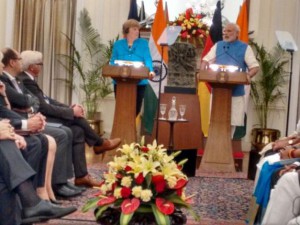 NEW DELHI: Just a few days after teaming up with India at the United Nations, German Chancellor Angela Merkel will arrive here on October 4. In a symbolic gesture, Dr. Merkel will board her flight to New Delhi a day after starting national celebrations for the 25th anniversary of German reunification.
Announcing the visit and explaining its various dimensions, German Ambassador to India Martin Ney described the timing of the Chancellor’s visit as “auspicious”. “October 3, 1990, is the happiest day in recent German history. I am sure that Chancellor Dr. Merkel and her Cabinet Ministers will bring along to India the jubilant spirit of this special celebration.”
The atmospherics of the visit will be lifted by the presence of six senior German Cabinet Ministers and a large business delegation that will be present at the India-Germany business meet to be held on October 6 here. Among the powerful Ministers will be Minister for Economic Affairs and Energy Sigmar Gabriel, Minister for Economic Cooperation and Development Gerd Muller, Minister for Foreign Affairs Frank-Walter Steinmeier and Minister for Defence Ursua von der Leyen.
Free Trade Agreement
Prime Minister Narendra Modi and Chancellor Angela Merkel will lead their respective teams at the third Inter-Governmental Consultations (IGC) to be held in Hyderabad House in the forenoon of October 5.
The agenda will cover issues such as security, economy, development, cooperation, clean energy, climate change, infrastructure, urban mobility, innovation, higher education, skills development, culture and food security. Dr. Merkel will fly to Bengaluru to spend the third day of her trip touring German enterprises in India’s Silicon Valley.
Though most of the German Ministers will depart after the IGC and the Joint Press Statement by the two leaders, Mr. Steinmeier will spend a day more in Delhi holding dialogue with National Security Adviser Ajit Doval.
Mr. Muller will spend an extra day for interactions on India-Germany business cooperation. The German Ambassador highlighted that Dr. Merkel would take up the pending issue of India-European Union Free Trade Agreement (FTA) and try to energise both Indian ties with Germany as well as the Union, where Germany is the leading power.
Dr. Merkel is expected to take advantage of Germany’s unique position in the Indian economy where it is at present the sixth largest trading partner and the largest trading partner of India in EU. Defence teams on both sides are expected to discuss the supply of six German conventional submarines to India.
“German defence companies will be bidding for conventional submarines in the coming months,” Dr. Ney said. But the bidding for the subs, estimated at around Rs. 50,000 crore, is expected to get more competitive as other countries have begun to show interest in the mega-contract.
Reportedly, Germans are hopeful that having lost to the French in the Rafale aircraft deal, they will get lucky while meeting the demands of the Indian Navy.