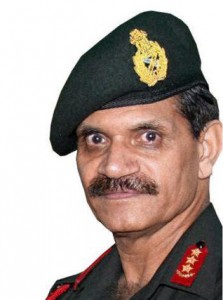 NEW DELHI : General Dalbir Singh Suhag today took charge as India’s new army chief, succeeding General Bikram Singh, who has retired.Lt. Gen. Suhag was appointed chief in May by the outgoing UPA government despite protests from former army chief, General VK Singh, and the BJP.
59-year-old Lt. General Suhag, a Gurkha officer who had participated in the 1987 Indian Peace Keeping Force operation in Sri Lanka, will have 30-month tenure.He comes from a family of soldiers.
A village in Jhajjar, Haryana, is celebrating the rise of the boy they knew as fearless.”He had a sharp brain and worked hard. He has achieved all this because of his hard work. He was fearless,” his mother said. Asked if she was happy, she said, “When my son has reached such great heights…of course I am.” His father Rajpal Singh Suhag is a retired flying officer.
“Generations of our family have been in the army. So he also had the desire to serve the nation. I was in the army, my grandfather and great grandfather were also in the army,” the former soldier said with pride, sitting in a room filled with medals and trophies.
Lt. General Suhag was made the Vice Chief of Army Staff in December last year. Before this he was the Eastern Army Commander.He was at the centre of a controversy after a vigilance ban on him by then army chief General VK Singh in connection with an intelligence operation in Assam.The ban was removed after General Bikram Singh took over in May, 2012.
General VK Singh is currently a minister in the BJP-led government. The BJP had questioned what it called the UPA’s alacrity to appoint Lt General Suhag and had insisted that the matter be left to the next government.
Soon after the BJP took power, however, Defence Minister Arun Jaitley said the appointment would not be scrapped.
Lt. General Suhag also commanded 53 Infantry Brigade engaged in counter insurgency operations in the Kashmir Valley in 2003-2005.An alumnus of Sainik School, Chittorgarh, he joined National Defence Academy in 1970 and was commissioned in June 1974.