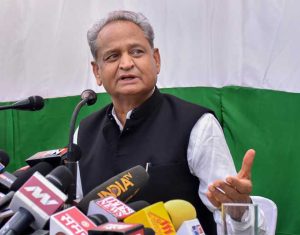 “Have always been a disciplined soldier of the Congress,” the Rajasthan CM said after meeting Gandhi. He also said that he felt sorry and have apologised to Sonia Gandhi for the developments in Rajasthan. Gehlot sought to play down the political crisis in the state for which three of his loyalists have been issued show cause notice by the party’s central leadership and said, “internal politics goes on, we’ll resolve it”.
Taking “moral responsibility” for the Rajasthan revolt. The Congress said Sonia Gandhi will decide “in a day or two” whether he will remain Chief Minister.”We work under Congress president.
Earlier, senior party leader Digivjaya Singh had decided to contest the polls. Digvijaya Singh has been involved in the planning of the Bharat Jodo Yatra which is led by Rahul Gandhi”Today I have come here to collect my nomination form (for Congress president elections) and will file it tomorrow,” said Congress leader Digvijaya Singh.
The Congress had convened a meeting of party MLAs in Jaipur as part of the process to choose a successor to Gehlot but his loyalists held a “parallel meeting”. Congress leaders Ajay Maken and Mallikarjun Kharge, who had gone to Rajasthan as observers, gave a written report to Sonia Gandhi.

Asked whether Ashok Gehlot will continue as Rajasthan Chief Minister, Congress leader KC Venugopal told reporters: “That decision will be taken by the Congress president in a day or two.”  With his abject apology and an election next year, Gehlot may just hold on to his job despite a massive, embarrassing revolt that would not have been possible without his support. More than 90 MLAs threatened mass resignation over reports that if Mr Gehlot ran for Congress president, he would be replaced by his rival Sachin Pilot in Rajasthan.

Ashok Gehlot dropping out of the race means a third candidate for Congress president, who has the blessings of the Gandhis, could be named soon. Nominations close tomorrow for the first Congress election in over two decades with non-Gandhi candidates. So far, it looks like a Digvijaya Singh versus Shashi Tharoor contest in the October 17 election. Both will file their nominations tomorrow. Digvijaya Singh met with Shashi Tharoor after announcing his decision to contest. Sharing a photo of the two hugging, Mr Tharoor tweeted: “I welcome his candidacy for the Presidency of our Party. We both agreed that ours is not a battle between rivals but a friendly contest among colleagues. All we both want is that whoever prevails, 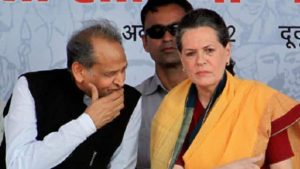 Ashok Gehlot was seen to be the Gandhis’ first choice for Congress president, until the rebellion by Rajasthan Congress MLAs loyal to him damaged his chances. The MLAs said they would not accept Sachin Pilot, who had rebelled against Mr Gehlot in 2020, as his replacement.
Ajay Maken and Mallikarjun Kharge, who described the rebellion as “gross indiscipline” in their report to Sonia Gandhi. Three ministers close to Mr Gehlot were asked to explain their role in engineering the rebellion within 10 days.
The Congress wanted Mr Gehlot to step down as Rajasthan CM before running for Congress president. He was also told that he must respect the leadership’s choice of who will replace him in Rajasthan. Mr Gehlot wanted to keep his Rajasthan job even while running for party chief. Rahul Gandhi last week made it clear that is not possible as the party would stick to its resolve of “one person, one post”.
(With Agency Inputs).