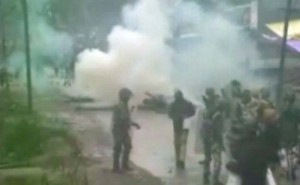 SRINAGAR: Violence has started again in South Kashmir’s Anantnag, where people protesting against the mob killing of a truck driver have clashed with the police. At least four protesters have been injured as police used pellet guns and tear gas shells to disperse the mob.
The protest is the third in three days over the killing of Zahid Ahmad. The 20-year-old resident of Anantnag was attacked with petrol bombs 10 days ago after rumours of cow killing surfaced in Jammu’s Udhampur. He died while under treatment on Sunday.

Unrest has started in the valley since. Clashes took pace in Anantnag on Sunday and Monday, when Zahid’s funeral took place. Yesterday a strike was observed across the Valley to protest against Zahid’s death. Even today, a shutdown is being observed in many parts of the district.
Due to clashes Srinagar-Jammu national highway was closed once again,and hundreds of stranded trucks and buses were cleared by police during the night.
“We were hoping that situation will return to normal since there was no strike or protest call by separatists groups today,” said a senior officer in Anantnag. “But scores young men started pelting stones on police and tried to block the national highway today. The police are exercising maximum restraint while handling with the situation.”
Sources say Prime Minister Narendra Modi’s Office is monitoring the situation in Kashmir and believe that Pakistan is fishing in troubled waters.
The opposition National Conference has blamed the BJP which rules Jammu and Kashmir in alliance with the People’s Democratic Party (PDP). Mr Abdullah said it was a “needless death” in the name of beef ban for which the “BJP and its allies” were responsible.

Nine men, all locals, have been arrested for the attack on Zahid. Sources say three of them belong to political parties and one is a suspended police constable.