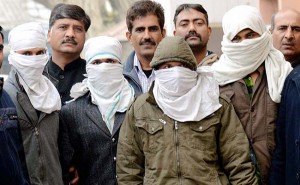 NEW DELHI: Four young men have been arrested from Uttarakhand for alleged links to ISIS. The men, who had been under surveillance for visiting ISIS propagandist sites, were allegedly planning to attack the ongoing Kumbh Mela at Haridwar in Uttar Pradesh, trains headed there, as well as strategic locations in the national capital, said  senior police officer  Arvind Deep.
He warned the arrested men were part of a bigger group and said, “The national capital faces threat until the entire module is busted.”
One of the men, Akhlaq ur-Rehman, who was arrested as he left an examination centre, has been questioned about the recent terror attack at the Pathankot air force base, where seven military personnel were killed by terrorists from Pakistan.
At a recent meeting chaired by Home Minister Rajnath Singh, officials concluded there is a “very real” ISIS threat for Republic Day, when French President Francois Hollande will officiate as Chief Guest at the huge parade in the capital.
The four men in Uttarakhand were arrested yesterday by the Delhi Police. They had reportedly been in regular touch on the phone with a contact in Syria, and had been using websites to study how to assemble a bomb.