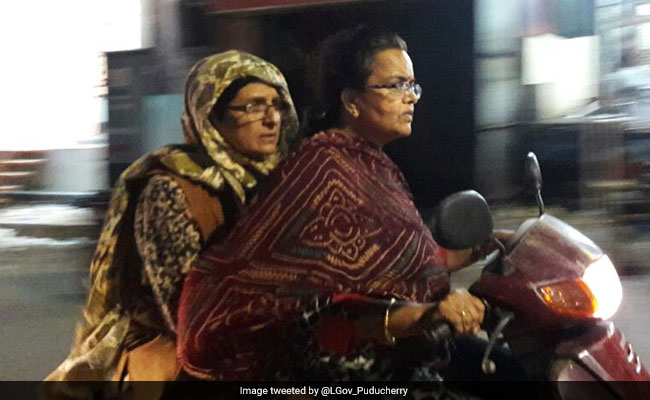 PUDUCHERRY : ”  Puducherry Lieutenant Governor Kiran Bedi hit the streets last night to figure out how safe the city was for women after dark. Riding pillion on a two-wheeler with another woman, Ms Bedi travelled “incognito” on her round of the union territory, a dupatta partially covering her face.

“Found Puducherry reasonably safe at night. But will be improved,” she tweeted this morning, announcing her late night round on Twitter. She did win wholesome praise from her followers, but many also spotted a violation of the law. Neither she, nor the woman riding the two-wheeler was wearing a helmet.
But the Lieutenant-Governor and her companion weren’t the only ones riding a two-wheeler without the protective headgear. It was the same case with at least one other two-wheeler that seemed to be accompanying her and taking pictures. Later, the retired Indian Police Service officer insisted that “not wearing helmet was a careful choice”.
“Both wanted to appear vulnerable and wanted to see how we women driving a scooty at night are looked at,” she said. Like Tamil Nadu, Puducherry did not enforce helmets for pillion riders for years but the Madras High Court in 2015 ordered the police to enforce the law on the protective headgear.

In February, Chief Minister V Narayanasamy declared that two-wheeler riders would compulsorily have to wear helmets from 1 May this year. The Chief Minister said two-wheelers accounted for 46 per cent of the total road accidents in the union territory. Last year, 60 people who did not use helmets while riding two-wheelers were killed in mishaps here last year.