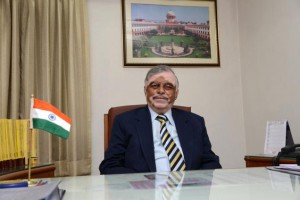 NEW DELHI : Despite objections from many quarters, Narendra Modi-led NDA government on Wednesday appointed ex-Chief Justice of India P Sathasivam as Governor of Kerala.Slamming the move to appoint former Chief Justice of India P Sathasivam as Kerala Governor, Congress wondered whether the government was “pleased” with his judgement in the Amit Shah case.
“Why was he made? This raises a question if he has done some work, for which they are pleased. Prime Minister Modi is pleased, Amit Shah is pleased and that is why he is being honoured?,” Congress spokesperson Anand Sharma told reporters.
The appointment comes as opposition parties have strongly criticized a political post for the former top judge, with the Congress alleging a “quid pro quo” Justice Sathasivam told Reporters “If I say no to this job, I have to do farming in my village. As a former Chief Justice of India I can have good relations with the state and the Centre and it will benefit the people of Kerala.”
A statement from Rashtrapati Bhavan confirmed Justice Sathasivam’s appointment hours after over 100 Kerala lawyers sent a resolution to President Pranab Mukherjee, asking him not to go through with it. The lawyers said if a person who held the highest judicial post is made Governor, which is a political appointment, then it will impact judicial independence.
The Congress has alleged that Justice Sathasivam’s appointment is linked to a case in which he ‘helped’ BJP president Amit Shah. The party pointed out that the BJP had opposed post-retirement appointments for judges.”There are instances of judges taking charge of the Green Tribunal, National Human Rights Commission… But what is in the persona or decisions of the most recently retired judge that has pleased the PM and BJP President Amit Shah? This raises a question,” Congress leader Anand Sharma said on Tuesday.
Justice Sathasivam was Chief Justice of India from August last year to April.Just before his term ended, Justice Sathasivam was on the Supreme Court bench that scrapped a second FIR or police complaint against Amit Shah in a fake encounter killing case, saying it was linked to the bigger Sohrabuddin Sheikh killing case and did not need to be separate.
Speaking to Reporters  on the Congress’ allegations, the former Chief Justice said, “There was no quid pro quo for my verdict on Amit Shah. Any other judge would have given the same verdict.”Since it came to power in May, the Modi government has moved firmly to replace governors appointed by the previous Congress regime with its own candidates.