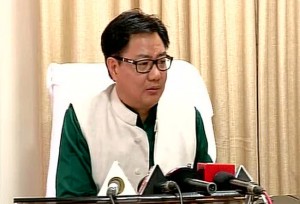 NEW DELHI: At a time when resentment against “VIP culture” in India has provoked campaigns on social media, it has emerged that an Air India flight was delayed last week for about an hour and a family of three, including a child, was offloaded to accommodate union minister Kiren Rijiju and Jammu and Kashmir Deputy Chief Minister Nirmal Singh.
On June 24, an Air India flight was about to leave from Leh for Delhi when an Indian Air Force Officer, his wife and child were reportedly asked to get off the plane for last-minute passengers.
These passengers were Kiren Rijiju, the union minister of state for home, and the Jammu and Kashmir Deputy Chief Minister, who had rushed to the airport after attending the “Sindhu Darshan” festival in the morning.
They have both denied delaying the flight; instead, they say, Air India had rescheduled the 11.40 am flight and advanced it at short notice.
Nirmal Singh has said that he has complained to the home ministry about the pilots, who, he alleged, “were rude and humiliated us.”
Mr Singh admitted that some passengers were offloaded. “Some passengers said they felt inconvenience, we apologised to them,” he told.
But Mr Rijiju says he didn’t realise that passengers were asked out of the plane for him. “If it was done, it is completely wrong and unacceptable,” he told the Press Trust of India from Darjeeling in West Bengal, where he is overseeing relief operations after deaths in landslides.
The minister’s office also offered a clarification on the offloaded family. “Our administration arranged our tickets and we were never informed that to make our seats, three passengers have been deboarded. Had we been informed, we would have never appreciated this step of the administration,” said an aide.
As he battled spiraling criticism, Mr Rijiju posted on Facebook today that a “wrong story” was being reported and offered his boarding pass as proof that the flight time was changed.
Mr Rijiju said when told that the flight had been advanced to 10:20 am, “I rushed to the Airport along with Dy CM of Jammu & Kashmir who also had a boarding pass printed with 11:40 dept time. Due to change in time inconvenience was created & Dy CM was very upset so he has lodged a complaint against the Pilots & Officials who preponed the Flight.”
Earlier this week, an Air India flight from Mumbai to New York, with Chief Minister Devendra Fadnavis on board, was delayed by nearly an hour allegedly on account of a member of his entourage. Mr Fadnavis has denied it.