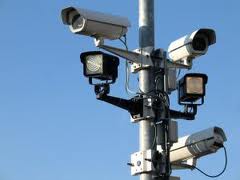 KOLKATA: At long last a Central Government plan to bring the metropolis and other cities, like Howrah and Newtown under more modern and technically advanced 1000 cameras (system), seems materialising.Incidentally, the Central project costing Rs 432 crore was drawn up during UPA II regime a year back which included other seven Indian metropolis, like Mumbai, Chennai, Bangaloru, Amhedabad, Hyderabad and Kolkata. But Government sources said: “Despite a year rolled by no initiative was taken to implement the project. But things seem to be moving as far as its implementation status is concerned.’’Under the surveillance of technically advanced cameras, the security will have 100 percent better access to crimes against women, terrorists trying to create disturbances, detecting them even trying to accomplish their mission in very fast and sophisticated  cars, “which present CCTVs cannot accomplish now put under operations in several important buildings and places,’’ an official added.The project in three cities would cost about Rs 100 crore and while the Centre would share 60 percent of the cost and state would contribute 40 percent.Interestingly, the question however was asked on why Howrah, came up 200 years before Kolkata, on the bank of River Ganga and Newtown were brought under this high-tech surveillance system?“With pro-Pakistan  Jammat still going strong in  Bangladesh and Awami League could not bring Pak influence under full control, we have to include most populated towns under this monitoring system, and both Howrah a gateway to several other districts in South Bengal and an immediate gate way to Kolkata had to be dealt with for all these possibilities,’’ a senior BSF official said.On Newtown which is increasingly chosen as place for neo-rich isn’t a safe place either, “so has to come under more strict surveillance system.’’However, officials could not yet confirm when exactly it would all start, but “we have indications positive enough that a definite move is initiated,’’ a senior official said.