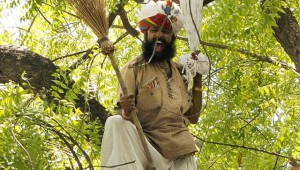 NEW DELHI : For around 25 minutes, a turbaned man on a tree remained a sideshow at the Aam Aadmi Party’s rally in Delhi. By the time anyone reacted, Gajendra Singh, a farmer from Rajasthan, had hanged himself.
Footage shows a crowd cheering, clapping, but barely registering Gajendra after he climbed the neem tree at Jantar Mantar a little before 1 pm on Wednesday. He is shown waving a broom (the AAP’s symbol), taking off a shoe and shouting, all the while balanced precariously on a branch.
Around this time, it is announced that Delhi Chief Minister Arvind Kejriwal has arrived on stage.  A loud cheer rises from the crowd, which still has Gajendra in peripheral vision.
When the cameras are on the man next, he has his white scarf around his neck and tied to a branch. He seems to be shouting at the stage, pointing at the leaders.
The crowd is still more focused on the AAP leaders seated on stage; only a few people start looking up at the man hanging from the branches. A group of policemen are also in the crowd, watching.
Then suddenly, the man is off the branch. He may have slipped, no one knows yet.His body is partly stuck in the branches.  Everyone’s attention is finally on him.
The police seem stumped; one of them is seen smiling. The crowd has no idea whether he is alive.Some volunteers start climbing the tree. Appeals are heard from the stage, urging the man: “Come down, come to the stage. The Chief Minister will meet you.”
AAP workers who finally get to Gajendra are seen cutting off the noose and he falls. His body was tellingly limp, and according to the man who cut him down, his tongue was protruding.
Apparently, Gajendra was dead before his body was taken from the rally to RML hospital nearby. A few minutes later, Arvind Kejriwal made his speech and said, “We kept asking the police to save him. But they did nothing.”