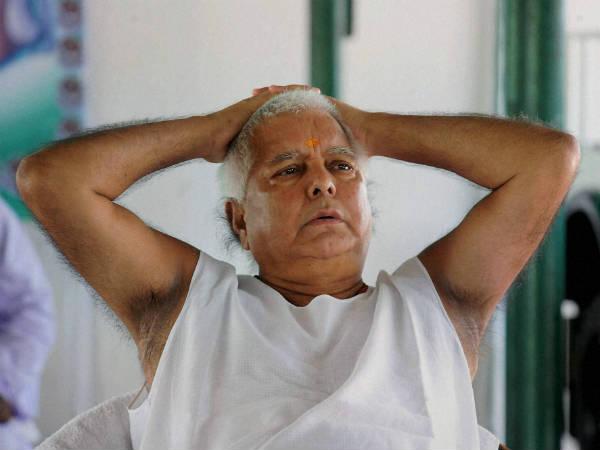 NEW DELHI : The Supreme Court on Monday ordered Rashtriya Janata Dal (RJD) leader Lalu Prasad to face a separate trial in a fodder scam related case. The move is a political setback for Bihar government as Prasad led RJD is an alliance partner.
Prasad will face charges including criminal conspiracy and fraud in the fresh trial. The apex court bench comprising justices Amitava Roy and P.C. Ghose also directed the state to conclude trial within 9 months.

The Central Bureau of Investigation (CBI) had appealed against the high court ruling. The major political setback for the RJD chief is also a cause of embarrassment for the Nitish Kumar-led Bihar government which is in alliance with RJD as a partner. The two parties had joined hands against Bharatiya Janata Party (BJP) in the assembly elections of 2015 and the alliance had won 178 seats in the 243 member assembly.
The apex court ruling implies that the veteran politician will now have to face prosecution separately in all fodder scam related cases. The apex court passed its order in response to a plea filed by the CBI opposing the dropping of charges against Lalu Yadav in connection with the fodder scam case.

Lalu, as he is popularly known, participates in the three-party coalition government in Bihar that is headed by Nitish Kumar, who is under increasing pressure to comment on various controversies engulfing Lalu and his two sons, who are both ministers in Bihar.

Lalu, 68, is banned from running for office after being convicted in what is known as the fodder scam – in the 1990s, while he was head of the Bihar government, feed for cattle was bought using inflated invoices; in some cases, despite money being paid, no fodder was bought at all. The swindle, according to the CBI, was worth about 1,000 crores and played out during 1990 to 1997.

In 2013, Lalu, who heads the Rashtriya Janata Dal, is named in six cases embedded in the fodder scam. He was convicted in 2013 in one of them and then asked that the others be dropped since he cannot be tried for the same offenses again. The Supreme Court has rejected that request and said he will be tried in all the cases.
It took more than a decade and a half for the fodder scam case to reach a verdict in the first case that saw him being sentenced to five years in jail; he is out on bail.Meanwhile, the veteran politician is embroiled in a fresh political controversy after a TV channel on Saturday released an audio tape of an alleged conversation between him and jailed don-turned-politician Mohammad Shahabuddin, wherein he was heard taking instructions from the later.

In view of the startling disclosure, the BJP-led Opposition has demanded the resignation of Chief Minister Nitish Kumar.However, the ruling grand alliance, comprising the Janata Dal-United (JD-U), RJD and the Congress in the state, has sought to distance itself from the row.

The audio clip was released by Republic TV on Saturday wherein the former don was heard saying that “your SP (Superintendent of Police) is of no use”.RJD dubs Lalu-Shahabuddin audiotapes doctored, JD(U) calls it attempt to destabilize Bihar government Lalu was also heard taking instructions from him over riots.
The BJP says it confirms that Lalu was in touch with a jailed underworld don and offered to examine various complaints he made, including about a police officer whose performance he described as problematic.With ANI inputs