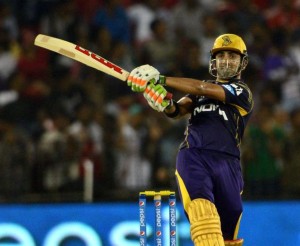 NEW DELHI : After regaining form with hat-trick of half centuries in the ongoing IPL, Kolkata Knight Riders skipper Gautam Gambhir says he is focused on the tournament ahead and not thinking about the Indian team’s upcoming England tour or the 2015 World Cup.The Indian team discard started this IPL season with three consecutive ducks but has certainly led by example in the last few games. He, however, said that he doesn’t take IPL as a comeback platform.
“I still stand by my thought that the IPL is not a platform for comebacks but it is a great tournament, which I thoroughly enjoy playing and I am doing my best for the team,” Gambhir, who last played an international match against England in Dharamshala in January 2013, told PTI in an interview.When asked if India’s tour of England in June and the World Cup Down Under are on his radar to make a comeback, he said he was not thinking about it right now.
“Right now I am only focused on the immediate future and doing well for the team. If my performances are good enough I am sure people in charge — selectors — will make the right decision,” he said.
He also said that he believes in responding through performance as far as critics are concerned.“As a player you realise that criticism is always going to be there especially if the results are not going your way. I personally feel the best way to respond to it is by going out there and performing to the best of your ability,” said the opener, who has scored 4021 and 5238 runs in 54 Tests and 147 ODIs, respectively.The Kolkata opener is also confident of contributing to the team’s cause once he gets a good start.
“It is a good feeling to have a few runs under my belt now. I was always confident that once I got a good start I would be able to convert those into scores that would help the team and I am glad that I have been able to do that in last few games. Looking forward to continue the good run for the rest of the tournament,” he said.Kolkata is at number four in the points table with five wins and as many losses in 10 games. Gambhir has admitted that the former champions had started slowly but gradually picked up momentum.
“We had a bit slow start and were unlucky in few games. Throughout the tournament we have played some good cricket but it was just a matter of ensuring we maintain the level for the entire game. The whole team has played well as a unit now and I am happy with everyone’s contribution,” he said.He is confident of emulating 2012’s success when he led the Shahrukh Khan-owned team to its first ever title triumph.
“The focus right now is to take each game at a time and put in our best effort in every match. We have a well balanced team with a good mix of experience and youth and I am confident that we can do well this year as well,” he said.Gambhir also conceded that the team is missing its home ground, Eden Gardens but is hoping to get the same encouragement from the Cuttack crowd, which is KKR’s ‘home’ this year.
“All teams had to play their matches when the first leg was played outside India. Obviously we have missed the support and atmosphere at Eden. We are sure that we will have the backing of the crowd in Cuttack as well,” said the veteran batsman.He dismissed the criticism that IPL has lost its sheen over the years.
“I enjoy playing in the IPL. The level of competition is very high and you have the world’s best playing in the tournament. It is a great opportunity for youngsters to show their talent,” Gambhir, who is one of the most successful batsmen in this lucrative T20 league, said.