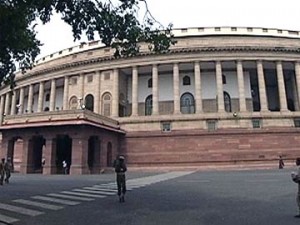 NEW DELHI : The inaugural session of the new Lok Sabha will commence on June 4, and end on June 11. This was recommended today by the Narendra Modi-led Union Cabinet.The first two days of the inaugural session, parliamentary affairs minister M Venkaiah Naidu told reporters, will be used to swear the new MPs in.
The Speaker of the 16th Lok Sabha will be elected on June 6. President Pranab Mukherjee will address the joint session of the two Houses of Parliament on June 9, and the next two days have been set aside to hold a discussion on the Presidential address. Prime Minister Narendra Modi will give his reply to the motion of thanks on the Presidential address at the end of the discussion.
The session, Mr Naidu added, could be extended by a day, if the need arose. But this will be finalized in consultation with the new Speaker.The special session will be followed by a full-fledged budget session after a gap. Preparations have begun for the first session of the new Lok Sabha. The BJP has kicked off the process of selecting its nominee for the Speaker’s post. The names being considered include those of former Union minister Sumitra Mahajan and Deputy Speaker in the previous  Lok Sabha Karia Munda. “The process of electing the deputy speaker will be taken up later,” Mr Naidu pointed out.Senior Congress leader and former parliamentary affairs minister Kamal Nath will be the pro-tem Speaker, who will perform the duties of the Speaker for now.
Mr Nath, who also held the portfolio of urban development ministry in the last government, won from his pocket-borough of Chindwara in Madhya Pradesh for the ninth term. “He is the senior-most member of the Lok Sabha. He has been a member of the House for 31 years,” Mr Naidu said.Mr Nath will be assisted by a team of three presiding officers in swearing the new members in. They include Arjun Charan Sethi of the Biju Janata Dal, PA Sangma (National People’s Party) and Biren Singh Engti (Congress).
Soon after taking over as the Parliamentary Affairs Minister on Wednesday, Mr Naidu had signalled that the government will go the “extra mile” to accommodate the opposition.
This could be interpreted as an indication that the government may not adopt a hardline approach on the issue of recognition of the Congress as the main Opposition which could give it the post of the Leader of the Opposition despite the party not having enough numbers.Mr Naidu, however, steered clear of direct questions on the matter insisting that “we have not discussed the issue.”
The Congress has secured just 44 seats in the Lok Sabha, 11 less than one tenth of the strength of the 543-member House required to get the post. The Speaker has the discretion to decide on the issue.