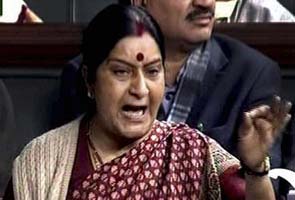 VIDISHA: The contest for the high-profile Vidisha Lok Sabha seat in Madhya Pradesh has taken an interesting turn with expelled Congress leader Rajkumar Patel filing his nomination as an Independent against sitting BJP MP Sushma Swaraj and Congress’ Laxman Singh.
Patel, said to be close to Congress General Secretary Digvijay Singh, surprised many as he filed his nomination papers at a time when Laxman, the younger brother of Digvijay, is pitted against Sushma – who is contesting from the seat for the second consecutive term.
Sushma had won the 2009 Lok Sabha election from Vidisha with a huge margin of over four lakh votes. That time Congress candidate Rajkumar Patel’s nomination was rejected on technical grounds. Patel had failed to submit the mandatory ‘B-Form’ in original on time which led to rejection of his candidature after which he was expelled from the party for six years. However, to prove his innocence in the matter, Patel had filed a poll petition in the Jabalpur bench of High Court in 2009 which is still pending. Patel, who had earlier been an MLA from Budhni and was also a minister in Digvijay Singh’s Cabinet, was expecting that this time Congress will not only revoke his expulsion but also nominate him from Vidisha.
But when Congress fielded Laxman Singh against Sushma, Patel decided to contest as an Independent and filed his nomination papers on Wednesday before the Returning Officer in Raisen.“My family and I members have been Congress loyalists for long and the Vidisha conspiracy ruined my three-decade long career in the party and put a big question mark over my credentials,” Patel told PTI over phone.
He had gone to Delhi to request Congress leadership to consider his claim for the seat clarifying that he was not at fault for the rejection of his nomination in 2009.“To prove my innocence, I had filed a poll petition in the High Court against Sushma’s election which was admitted after 46 objections were rejected by the court, but later she got a stay from the Supreme Court,” Patel said in support of his claim.“I have also written a letter to Congress President Sonia Gandhi and Vice President Rahul Gandhi, requesting them to consider my genuine claim from the seat,” he said.
Incidentally, Patel belongs to Kirar caste which has a decisive vote bank in Vidisha constituency. When asked if he was firm on contesting the polls in the event of Congress denying him ticket from Vidisha, Patel said, “I still have enough time to think over it.”Vidisha, which traditionally has a stronghold of the BJP, has elected in the past number of stalwarts including Atal Bihari Vajpayee, Rajmata Vijayaraje Scindia, Ramnath Goenka, Shivraj Singh Chouhan and Raghavji.The Congress had won from Vidisha last time in 1984, when Pratap Bhanu Sharma emerged victorious from there after the assassination of Indira Gandhi. Sharma had also won the seat in 1980 during the ‘Indira wave’.