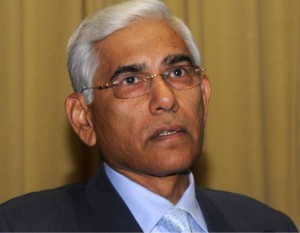 NEW DELHI: Prime Minister Narendra Modi has approved the constitution of a Banks Board Bureau or BBB to help banks in India to tide over the crisis created by bad loans. According to sources the board will reduce political interference in the functioning of banks.

Former government auditor Vinod Rai, who received a Padma award last month, will head the board as its chairman. Anil Khandelwal, former chief of the public sector Bank of Baroda, ICICI Bank’s former Joint Managing Director H N Sinor and Rupa Kudwa former chief of CRISIL will be members.
The move comes a day ahead of the Union Budget being presented in Parliament. The government, sources said, is expected to come under fire from the opposition for mounting bad debts of public sector banks.
The board will recommend appointment of directors in public sector banks and “advise on ways of raising funds and dealing with issues of stressed assets.” It will also be a bank holding company which will hold all government investments in public sector banks, sources said.
The Standing Committee on Finance, in its report tabled in Parliament last week, had said the Reserve Bank of India or RBI was becoming a “passive regulator.” Government-run banks have accumulated bad loans of over nearly Rs. 6,80,000 crore leading to a crisis in the banking sector, the report said.
The RBI set a deadline of March 2017 for banks to clean up their balance sheets, forcing them to promptly disclose their, take remedial measures and make adequate provisions in their financial statements. The banks have begun complying with effect from their latest set of financial results, which are for the quarter ended December 31, 2015.