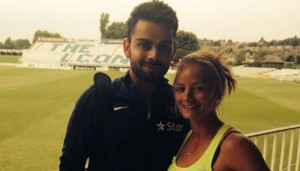 NEW DELHI: When Virat Kohli played a flawless knock against South Africa in the semi-final of the WT20 in 2014, he won himself several admirers.
One among those was England woman cricketer Danielle Wyatt who immediately tweeted ‘Kohli, marry, me!’ after the right-hander’s stupendous innings.Indian cricket fans circulated that tweet so widely, it became national news.
Wyatt then met Virat in England when the Indian team was in town to play a four-match Test series.Despite it being two years since the incident, fans continue to comment and re-tweet the post even today.
The 24-year-old is currently in India as part of the England team for the ICC World T20 and will have another opportunity to meet the man who she wanted to ‘marry’ in 2014.