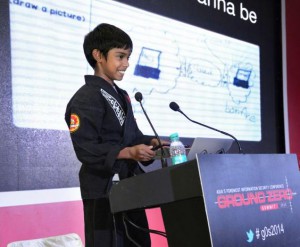 NEW DELHI : He may not be old enough to open a Facebook account, but has a tip or two about how Internet users can protect their content from hackers. This and much more found mention in eight-year-old Reuben Paul’s keynote address on the second day of a summit on cyber security held here.
On Children’s Day, Reuben’s presentation also focussed on online threats faced by millions of children using the Internet across the world. He discussed various aspects like cyber bullying, exposure to undesirable content and falling prey to hacking.
The large audience, which listened to him with rapt attention, was not only exclusively adult but comprised renowned cyber experts and even policy-makers.Most of them said that Reuben not only impressed them with his repository of knowledge but also his skills and style.
The audience were treated to a display of Reuben’s secondary skills – his deftness of Kung Fu, something he has been learning for a while.Hailed as a prodigy, Reuben even serves as the CEO of a company that develops Apps which help children learn mathematics, science and, of course, cyber security.
It all began at the age of five, said father Mano Paul – an expert on cyber security himself who travels across the globe delivering lectures on the subject.Mr. Paul, who hails from Tamil Nadu and was living in Orissa before migrating to the United States nearly a decade ago, said Reuben was drawn to computers instinctively and his sheer inquisitiveness had won him worldwide reputation.
His mother Sangeetha said his aptitude to learn doesn’t stop at computers and Kung Fu.“He goes for swimming, gymnastics, piano and hockey lessons. He also plans to join cooking and basketball classes from next year,” she said.So does it affect his grades? “He is an A-lister,” she said, adding that a balance between studies and other activities was maintained by going for one activity per day.