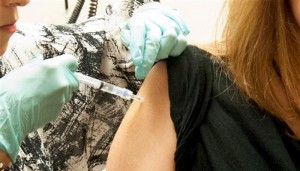 WASHINGTON: Researchers say they`re a step closer to developing an Ebola vaccine, with a Phase 1 trial showing promising results, but it will be months at the earliest before it can be used in the field. The news comes amid the worst ever outbreak of the hemorrhagic fever, which has killed nearly 5,700 people, mostly in West Africa.
Pharmaceutical companies and health agencies are scrambling to fast-track experimental drugs and vaccines that could help.In the first phase of testing, all 20 healthy adults injected with a higher or lower dose of the vaccine developed antibodies needed to fight Ebola, said the National Institutes of Health (NIH), which conducted the study.
Results were published Wednesday in the New England Journal of Medicine.”The unprecedented scale of the current Ebola outbreak in West Africa has intensified efforts to develop safe and effective vaccines,” said Anthony Fauci, head of the National Institute of Allergy and Infectious Diseases, which is developing the vaccine alongside GlaxoSmithKline.
The vaccines under development “may play a role in bringing this epidemic to an end and undoubtedly will be critically important in preventing future large outbreaks,” he noted.
“Based on these positive results from the first human trial of this candidate vaccine, we are continuing our accelerated plan for larger trials to determine if the vaccine is efficacious in preventing Ebola infection,” he added.But the NIAID/GSK vaccine is still a long way from being ready for use in the field.
The NIAID is “in active discussions with Liberian officials and other partners about next-stage vaccine testing in West Africa” for efficacy and safety, the NIH said, but no announcement on larger-scale trials was expected before early next year.
There is no licensed treatment or vaccine against the Ebola virus, which is transmitted through bodily fluids and has been fatal in an estimated 70 percent of cases in the current outbreak.The volunteers were injected starting in September, and each showed a positive result for Ebola antibodies in blood tests within four weeks.
The 10 volunteers in the higher-dose group developed higher antibody levels, the NIH said.In addition, two of the lower-dose group and seven of the higher-dose group developed a kind of immune cell called CD8 T cells, which are an important part of the body`s response against disease.
“We know from previous studies in non-human primates that CD8 T cells played a crucial role in protecting animals” who got the vaccine and then were exposed to Ebola, said researcher Julie Ledgerwood, the trial`s principal investigator.
None of the volunteers experienced serious side effects within the study period, though two had a brief, mild fever within the 24 hours after the injection.
The vaccine uses a modified chimpanzee cold virus to deliver segments of genetic material from the Ebola virus.
The genetic material cannot spread in the body like the virus does, but can still prompt the antibody response.The version tested at NIH contains material from two species of Ebola — the Zaire species, responsible for the outbreak in West Africa, and another called Sudan Ebola.
“This work is encouraging and another significant contribution to efforts to tackle the Ebola crisis,” said Dr Jeremy Farrar, Director of the Wellcome Trust.The White House also congratulated the vaccine researchers.
“We congratulate Drs Francis Collins and Tony Fauci and their teams at the National Institutes of Health on the first published results from Phase 1 clinical trials of a promising Ebola vaccine candidate,” a White House statement said, adding that President Barack Obama would visit the NIH next week.
A second version of the vaccine, aimed at blocking just Zaire Ebola, also began human testing in October, at the University of Maryland.
Another experimental vaccine that has shown promising results in primates is the Canadian VSV-EBOV, licensed by US firm NewLink Genetics. It is also in early stages of human testing.
The World Health Organization said Thursday that the global death toll from the Ebola virus had increased to 5,689 out of a total of 15,935 cases of infection, almost entirely in western Africa.The new numbers increased the death toll by 230 people and a 584 case increase from reports last week.
The WHO believes that the number of deaths is likely far higher, given the difficulty in collecting comprehensive figures and Ebola`s high fatality rate.
The first case discovered in the current outbreak was in Guinea in December 2013.