NEW DELHI: Hundreds of thousands of odd-numbered cars will go off the roads in the national capital as the odd-even scheme enters its second day today.
Delhi Deputy Chief Minister Manish Sisodia on Saturday was spotted riding on his bicycle while heading to the AIR office in New Delhi. Sisodia owns an odd-numbered car and therefore, the minister left his four-wheeler at home and used his bicycle to commute on the second day of the odd-even plan.
Several odd-numbered cars were spotted rushing to their destination early morning today. The restriction period is from 8am till 8pm. The private vehicles are free to play on roads before 8am or after pm.
Pollution live metres have been installed at six place in Delhi by the state government for monitoring real-time air quality. The meters displayed real-time values of the particulate matter – PM 2.5 and PM 10 in air. Also, a portable air monitoring station was deployed in New Delhi for air quality assessment.
Delhi Transport Corporation (DTC) buses were very much in demand on Friday, the first day of the novel odd-even car formula. An estimated 4 millions commuters availed the service of the public transporter on first day of the car plan. However, as per the officials of Delhi Metro, they saw no substantital jump in its ridership.

As many as 203 people were fined for violating the norms in the odd-even scheme on the first day of its implementation in Delhi.At least 76 auto-rickshaws were also challaned for refusing to carry passengers to their destination. 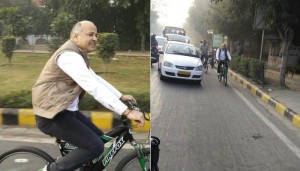 Few auto-rickshaws were issued challans for refusing to run by meter, thus causing inconvenience to people, who choose to take public transport to commute. According to a government officials, nine complaints were received against bus services.