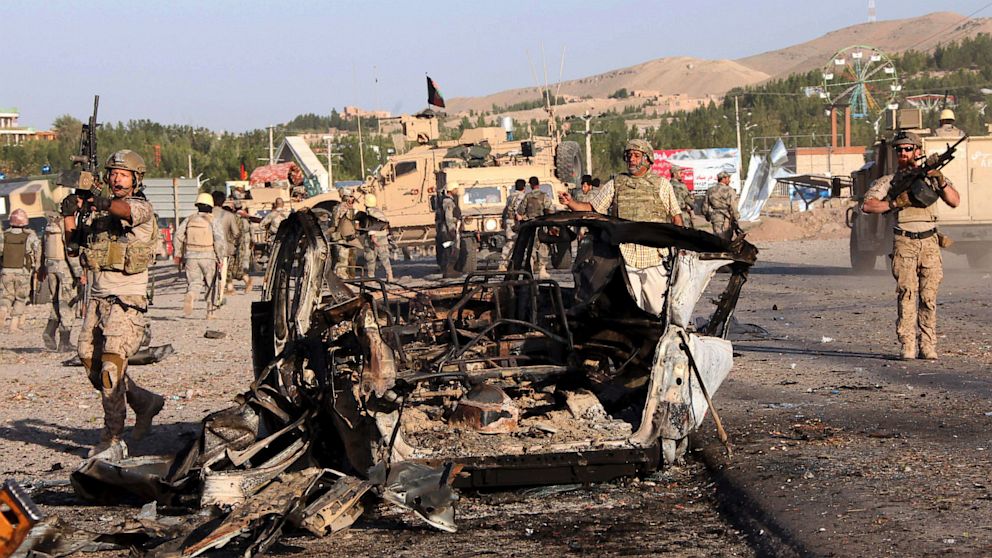 HERAT (Afganistan): A suicide attack on a Shiite mosque in the western Afghan city of Herat killed more than 29 people and wounded more than 64 on Tuesday, officials said.Abdulhai Walizada, a local police spokesman, said there appeared to be more than one attacker, with witnesses describing a suicide bomber who detonated explosives and at least one other, a gunman who threw grenades at worshippers.

“Two attackers entered the mosque and started shooting and throwing grenades at people,” said Mohammad Adi, who was injured in the attack and taken to hospital.Mohammad Asif Rahimi, governor of Herat, confirmed the death of 29 people and injuries to 64.

The incident comes two months after an attack on a 12th century mosque, known as the Jama Masjid in Herat, in which seven people died. There was no claim of responsibility for Tuesday’s attack. The Taliban, fighting to install strict Islamic law and drive foreign troops out of Afghanistan, denied any involvement.
Saturday’s attack would highlight rare cooperation between the armed groups.Fighters killed more than 50 men, women and children in the remote Sayad district of northern Sar-e Pul province after overrunning government-backed fighters of the Afghan Local Police (ALP) in a 48-hour battle, according to local officials.
“It was a joint operation by ISIL and Taliban fighters,” Zabihullah Amani, spokesman for the provincial governor, told AFP on Monday. “They had recruited forces from other provinces of the country and attacked Mirzawalang village.” The spokesman alleged that dozens of Taliban and ISIL fighters under the command of Sher Mohammad Ghazanfar, a local Taliban commander who Amani claims pledged allegiance to ISIL, launched a coordinated attack on the area on Thursday.

“The fighters overran the area, and it led to the massacre of innocent and defenceless civilians,” he said.
Trump weighs US options in Afghanistan. Most of those killed were shot, but some were beheaded, Amani said.Afghan President Ashraf Ghani on Sunday condemned the killings as a “war crime”.”This barbaric act of them is deemed a direct violation of human rights and a war crime,” Ghani said in a statement.
Mohammad Noor Rahmani, head of Sar-e-Pul’s provincial council, said 44 of the 50 victims were believed to be civilians, with ALP also suffering casualties.”This is not the final toll,” he told AFP. “It might change because the area is inaccessible and no telephone networks are working to get an update.”

Al Jazeera’s Jennifer Glasse, reporting from Kabul, said the remote area of Sar-e-Pul had been under heavy pressure for the past two years with the presence of both Taliban and ISIL-related groups. “The fighting has been difficult up there,” she said. Taliban and ISIL fighters have regularly clashed since the latter gained a foothold in eastern Afghanistan in 2015, as the two vie for supremacy in the war-torn country.
An Afghan security source told AFP there had been around three incidents in the past where fighters from both groups had teamed up to deal a blow to Afghan forces in certain areas. Zabihullah Mujahid, a spokesman for the Taliban, confirmed to AFP that it had captured Mirzawalang village but said it had done so alone.
“It was an independent operation by our mujahideen forces,” said Mujahid. “There is no cooperation with the Islamic State on the operation,” The Taliban also rejected reports of civilian casualties as “hollow propaganda by the enemy”.Fighting has intensified this year across Afghanistan, with multiple security incidents recorded almost daily.
Last week, dozens were killed in a suicide attack at a packed Shia mosque in the western province of Herat. In the first half of the year, 1,662 civilians were killed and 3,581 injured, according to the UN figures.In a recent report, the Special Inspector General for Afghanistan Reconstruction (SIGAR), a US oversight body, said 60 percent of Afghanistan’s districts are under government control, while the remaining 40 percent are held by the Taliban or other armed groups.At least 2,531 Afghan troops were also killed between January and May, SIGAR said.
Thousands of US forces have been stationed in Afghanistan since 2001 when the US forces drove the Taliban from power.But the armed group has since regrouped and now poses a major security challenge for the US-backed government in Kabul. More than 1,700 civilians have been killed in attacks in Afghanistan so far this year, hitting confidence in the western-backed government of President Ashraf Ghani.