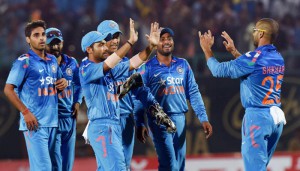 SYDNEY: Former Australian batsman Michael Hussey warned teams against underestimating India after their 0-2 loss in the Tests series and said the visitors will be a confident side when they start their title defence in next month’s World Cup.
“The big positive for India is that they have already been in Australia for the last two months. They are now well versed with the conditions here, the pace and bounce of pitches. They also have a tri-series coming up involving England. So they have a good run before the World Cup starts and nobody should underestimate them because of the Test results,” Hussey said.
“Don’t read too much into the 2-0 scoreline because not only did India compete hard in the Test series but they are a completely different outfit in limited-overs. They are very confident in that mode,” he added.
India lost the four-Test series against Australia after going down in the first two matches.Talking about India’s performance, Hussey said the visitors’ batting line did well but the bowling lacked disciplined.
“Well the batting has completely changed and they have done well. Virat Kohli is a fantastic player and he has just scored runs by the heaps. I think this will continue for him going forward,” said Hussey, who was part of the Australian team during India’s 2011 tour.
“But then there have been others too, like Murali Vijay and Ajinkya Rahane, giving support to Kohli. Something like that was missing in the 2011 tour. Not to mention they have been able to unearth a talent like KL Rahul. It is quite an achievement for a youngster to come to Australia and get a maiden Test ton.
“I dare say that this Indian attack looks better than the one in 2011 and they are all good bowlers individually. But there is a difference between being a good bowler and bowling good. And they have bowled poorly, lacking in discipline throughout the series. However I also do believe that this series will serve as great exposure for them and they can learn a lot from this tour for the future.”
The ODI season in Australia is about to begin this week with the tri-series against India and England starting on January 16. The after-taste of India’s 2-0 loss in the four-Test series prior will slowly dissipate. However with the ODI World Cup only a month away, the clock on Duncan Fletcher’s reign as Indian coach is slowly ticking down.
Hussey, whose name started doing the round as soon as 2015 started, has ruled himself out of the race atleast for the time being. “The news that my name is in contention came as quite a surprise. I have known MS Dhoni for quite some time now and it is flattering to even think that he would think so highly of me. However, I haven’t spoken with him on this matter and I don’t know how much truth there is to this whole story,” said Hussey.
“No one has talked to me about this and there have been no approaches to me from the BCCI at this stage to be the next Indian coach.”
When asked if he would indeed be interested should the BCCI contact him at a later time, Hussey replied: “To be honest, I haven’t thought about it at all. At this stage in my career, I am still playing cricket actively, here in the Big Bash League and of course in the Indian Premier League as well. So I am not thinking about it at the moment.
“At some point in time, if I do think about it, well, India is a cricket-loving, cricket-mad nation, where a billion people support their team. I can only say that it will be one of the most exciting and huge challenges of my life if I ever get mixed up in an opportunity like this.”
Clearly, coaching is not on Hussey’s radar at present. But that isn’t entirely true as well, for he is in the auction mix for the upcoming IPL season after being released by Mumbai Indians recently. There have been instances earlier of senior players taking a dual responsibility in the IPL.
“I am still looking to play on at the moment and I am keeping my options open. I have played for Chennai Super Kings and Mumbai Indians so far in the IPL. The auction provides me a chance to play for one of those teams again or perhaps a new team this time around,” he said.