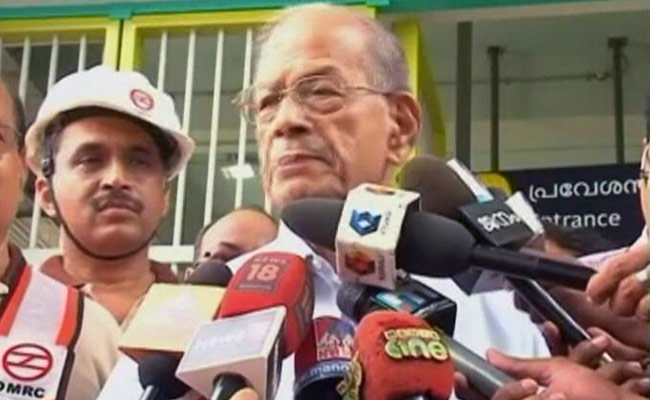 KOCHI : ‘Metro Man’ E Sreedharan on Thursday said he was not disappointed with his name missing from the list of dignitaries who will share the stage with Prime Minister Narendra Modi during the Kochi Metro inauguration on June 17. Sreedharan, who is the principal advisor for the Kochi Metro project, urged everyone not to rake up the issue.
While speaking to the mediapersons he said, “Don’t make it into controversy, security of PM is important, must follow what security agency says, adding that he was not disappointed with his name being excluded.The ‘Metro Man’ made the comments while inspecting the newly constructed Kochi Metro train station.
Prime Minister Narendra Modi will on Saturday travel on a Kochi Metro train when he inaugurates Kerala`s first metro, it was announced on Wednesday. But “Metro man” E Sreedharan has not been given a seat on the dais.
As per the approved list from the PMO, the prime minister, governor, chief minister, Union minister Venkaiah Naidu, KV Thomas, MP, state minister Thomas Chandy and Mayor Saumini Jain are the seven persons who will be on the dais at the inaugural function, according to an official release.Kochi Metro Rail Ltd Managing Director Elias George, who will welcome the gathering, has not been permitted to be on the dais.
After hearing about the exclusion of Sreedharan, Opposition Leader in the State Assembly Ramesh Chennithala and local legislator PT Thomas, Vijayan has written to the Prime Minister`s office to include these three also.In the first 25-km phase, trains will run for 13 km between Palarivattom and Aluva. Work is on the remaining section.