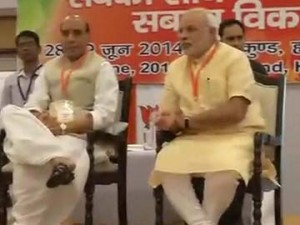 SURAJKND: Prime Minister Narendra Modi tells BJP MPs that all of them should prepare a roadmap for next six months.Stay away from corruption and dynasty politics, tells Modi.Concentrate more on your work than engaging in blamegame, Modi tells first-time MPs.
Instructing them to keep good conduct inside and outside Parliament, the PM further tells MPs to take good care of their constituencies.After grabbing a massive Lok Sabha victory, Modi now tells MPs to defeat Congress in Legislative Assembly elections.The PM urges MPs to refrain from giving any chance to the Opposition to malign the government.
According to sources, the PM tells BJP MPs to keep up good image of the government amongst people.
Prime Minister Narendra Modi, Home Minister Rajnath Singh, party veteran LK Advani, and other top leaders will give lectures to the MPs on enhancing their Parliamentary and public conduct.Modi, who himself is a first-timer member of the Lok Sabha, will deliver the inaugural address.He, along with Rajnath Singh, will also try and inspire the new legislators to emulate best practices, a news agency quoted party sources as saying.
After winning massive public mandate, it’s time for BJP to meet the expectations of voters. This will be taught to them by Union minister Venkaiah Naidu.Finance Minister Arun Jaitley will apprise the attendees of their rights and duties as parliamentarians.
Foreign Minister Sushma Swaraj will teach them about etiquette in Parliament. Power Minister Piyush Goyal will instruct them on how to use social media responsibly and effectively.LK Advani will be the final speaker at the workshop, which will be dismissed at 4 pm on Sunday.
The first-time MPs will also be told on how to spend their MPLAD fund in the best public interest. Party leaders say the workshop will impart training to them on how to put good questions in Parliament and what kind of urgent public matters to raise during Zero Hour debates in both the Houses.
The workshop will also stress upon them to improve their attendance in Parliament and strengthen their skills by reflecting on problems of their constituencies and mitigate public suffering by helping to find solutions for them.
The MPs will also be given some lessons on their public conduct.The workshop comes ahead of the Budget Session of Parliament starting July 07.Around 180 newly-elected BJP MPs, including 162 from the Lok Sabha and 18 from Rajya Sabha will attend the training workshop which will give them tips on improving their performance as an MP as well as on their conduct.There are around 40 MPs from among the SCs/STs while another 30 are women first-time members.
All the arrangements have been made for the accommodation of the MPs at the hotel where the workshop will be conducted and at the nearby hotels.