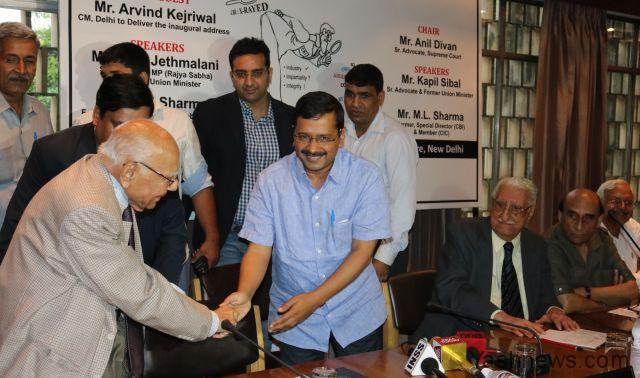 NEW DELHI : Eminent lawyer Ram Jethmalani is making headlines for the bills he raised to represent Arvind Kejriwal in court. Jethmalani’s fees as a lawyer has become a talking point on social media after one of his letters to Kejriwal went viral.

Do you know how much Ram Jethmalani charges per visit to defend Arvind Kejriwal in court? It’s whopping Rs 22 lakh per visit! Not only this, Jethmalani has charged Rs 1 crore as retention fee to represent Arvind Kejriwal in court. Here is the letter which has gone viral on internet:-
Reportedly, the bill raised by Jethmalani on December 1, 2016, quotes Rs 1 crore retainership for representing Kejriwal and an additional Rs 22 lakh per appearance. Jethmalani has made 11 appearances so far, leading to a total of Rs 3.42 crore

Also, Ram Jethmalani on Tuesday offered to defend Delhi chief minister Arvind Kejriwal for free in the court, if the latter is not able to pay his fees. “Even if (Delhi) government doesn’t pay or he can’t pay, I will appear for free, will treat him (Kejriwal) as one of my poor clients,” Jethmalani, who has raised a bill of Rs 3.42 crore for his services to Kejriwal, was quoted as saying by the ANI.

In 2015, Jaitley had filed a criminal defamation complaint against Kejriwal and AAP leaders Raghav Chadha, Kumar Vishwas, Ashutosh, Sanjay Singh and Deepak Bajpai over their comments over the Delhi District Cricket Association (DDCA) controversy, seeking their prosecution for offences that entail a punishment of up to two years in jail.
A civil defamation suit has also been filed by Jaitley before the Delhi High Court in relation to the matter seeking Rs 10 crore in damages. Sources said that the Lt Governor is learnt to have written to Kumar seeking his advice on whether the payment should be cleared or not.

Meanwhile, Ram Jethmalani has said that if Delhi Chief Minister Arvind Kejriwal cannot afford to pay his fee, he will not charge the politician to defend him in court. His offer comes after a controversy was triggered by Mr Kejriwal’s government attempting to pay a 3.8 crore bill for the politician’s lawyer accrued in a civil and criminal defamation case brought against him by Finance Minister Arun Jaitley.
“I will certainly defend him even if he can’t pay, but he said ‘no, I want to pay, send us the bills’, so I have sent bills. If it is incumbent on me to support him and his livelihood I will support him, because he is a clean force as opposed to Arun Jaitley,” said Mr Jethmalani, who is 93 and was expelled by the  BJP, four years ago.

The case against Mr Kejriwal was filed in 2015 and accuses him of making unsubstantiated allegations of corruption against the Finance Minister related to the period when he headed the Delhi and District Cricket Association or DDCA, the main cricket administration body for Delhi and its surrounding areas.

Mr Kejriwal engaged a retinue of lawyers to represent him. Both the Finance Minister and he have appeared in court in connection with the case. Mr Kejriwal’s deputy, Manish Sisodia, signed off on the legal bills and sent them for clearance to Delhi’s Lieutenant Governor Anil Baijal, who has sought the opinion of experts on how to proceed.
“It is you who made the statement – then why should people pay? It is you who should pay,” said union Minister Prakash Javadekar, claiming that the Chief Minister’s Aam Admi Party is “trying to loot the people.”Mr Jethmalani has reportedly sent bills for Rs.1crore in retainership and Rs.22 lakh for each appearance in court to the Delhi Chief Minister.
AAP says that the government should pay the bill because the case targets the office of the Chief Minister, and not an individual.The Finance Minister, a famous lawyer too, has sought 10 crores in damages.
AAP leaders also claimed that Mr Jethmalani had initially offered to represent Mr Kejriwal free of cost against Mr Jaitley, but about nine months after taking the case, he started sending bills to the Chief Minister.Last week, the Lieutenant Governor said that AAP must reimburse the government 97 crores for ads that promoted Mr Kejriwal and his party in violation of Supreme Court guidelines.

M Kejriwal and his party have repeatedly accused the centre of using the Lieutenant Governor, who functions as its representative in the capital, to undermine the Delhi government.Meanwhile,