NEW DELHI :L The Congress Wednesday went to the Election Commission seeking cancellation of Narendra Modi’s candidature from both Vadodara and Varanasi, as the BJP leader flashed a lotus symbol during a press interaction near a polling booth. 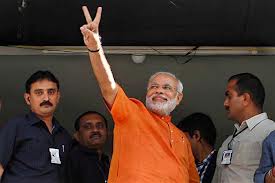 After casting his vote at a polling booth in Gandhinagar, Modi flashed his inked finger along with a lotus flower, the BJP’s election symbol.He displayed the lotus symbol with his inked finger throughout the interaction with media persons.
“We have complained to the Central Election Commission. We have sought immediate action by the commission, disqualifying Modi from both his seats,” Congress spokesperson Meem Afzal told reporter.The Congress leader said the party first sent a message to the commission, and soon after filed a written complaint.
The Model Code of Conduct of the Election Commission prohibits displaying any symbol attached to political parties in or near polling booth, as it may influence the voters.Attacking Modi, Afzal said Modi is “arrogant” and considers himself “above law”.
“He is just tearing apart law… Modi thinks he is already the prime minister and perhaps above law,” Afzal said.“But he forgets in this country even the prime minister is not above law,” he said.