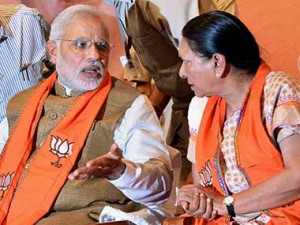 AHMEDABAD: Concerned about a widely shared perception regarding Gujarat Chief Minister Anandiben Patel’s children: Anar and Shwetank (Sanjay)’s emergence as parallel power centres who “interfere in the governance and influence decision making,” Prime Minister Narendra Modi has reportedly asked his successor and protégé to “dispel the perception” and “rectify her image” that has apparently taken a beating giving rise to speculations about her continuation at the helm of government.
“The way, the perception has been built and spread, it’s a matter of great concern and Prime Minister and others have conveyed to her to rectify and improve the image,” said a top source close to her and the Prime Minister.
“Not only in Gujarat, even in Delhi, it has become a point of discussion regarding her children’s involvement in the governance process,” he said, stressing that “this perception has been created by her rivals from within the party as well as opponents.”
“Neither of the two, Anar or Shwetank, have ever tried to interfere in our work,” the official, however, added.
It is learnt that the Prime Minister Modi had a word with Chief Minister Anandiben Patel on the issue when she had gone to Delhi on January 25, the day Amit Shah was elected as BJP president.
Some BJP workers and bureaucracy have even started drawing comparisons between her government and that of Keshubhai Patel, who also faced allegations of interference and corruption by his family members, that eventually led to his unceremonious removal from the power in October 2011.
Ever since the 73-year-old Ms. Anandiben Patel took over as Chief Minister of Gujarat succeeding Mr. Modi following the parliamentary polls in May 2014, an impression has gained ground that her two children are powerful and wield influence in the government.
Shwetank Patel, (who changed his name from Sanjay) is a businessman and owns a Bombay stock exchange (BSE) listed company Ananr Industries Ltd, which as per its website “is an integrated construction, infrastructure development and management company in India.”
His 44-year-old sister Anar is social entrepreneur and business woman, who runs several trusts promoting handicrafts, artisans and works among slum children. She also runs Anar Projects Ltd, which too is engaged in real estate activities.
A prominent factor that has apparently given rise to the perception is their proximity to top builders and real estate players in Ahmedabad where land and realty prices have skyrocketed in last decade.
Ms. Anandiben’s decision to retain lucrative portfolios revenue and urban development with her even after she became Chief Minister has only added credence to theories that “the family has huge interests in real estate sector” in the state’s commercial capital Ahmedabad. Under Mr. Modi, she was cabinet minister holding portfolios like revenue, urban development, road and buildings etc.

“When I was in revenue, I never came across any instance of interference or recommendation from any member of the Chief Minister’s family notwithstanding the strong impression in the market. But most of the critical decisions regarding land and real estate are taken at district collector or municipal commissioner level,” a senior bureaucrat told , indicating that “interference could be at district level.”
No wonder, besides, realty and land matters, another area where they allegedly influence the decisions is about appointments of district level officials in the state.“I am not sure about their involvement and whether is done for quid pro quo but certainly they do provide inputs to the Chief Minister on certain issues,” a BJP MP told