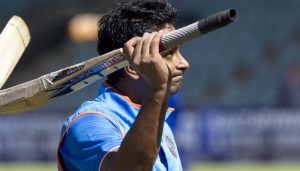 HARARE: Pleased with his match-winning hundred in the cliffhanger against Zimbabwe here, Indian batsman Ambati Rayudu said observing Mahendra Singh Dhoni handle pressure has helped him learn how to control the game in tough situations.
Rayudu’s career-best unbeaten 124-run knock yesterday proved crucial as India held on for a four-run victory over Zimbabwe in the opening ODI here.
“I have been batting in situations like that for the last four-five years in the IPL. Also I have been part of the Indian team for a couple of years now and have spent a lot of time sitting in the change room watching Dhoni bhai bat in similar situations,” Rayudu told ‘bcci.tv’.

“I keep observing what he does and how he controls the game. There is a lot you can learn just by sitting out and I am happy that whatever I am learning, I am able to implement in the middle,” he said.
Rayudu said yesterday’s knock would count among his most special knocks. In 30 ODIs so far, he has scored 911 runs at 45.55 with five fifties and two centuries.
“I would rate this as one of my better innings, especially scoring it after the team being five down. The ball was doing a lot at the start. It felt like we were batting in England rather than in Zimbabwe.

“It feels satisfying because we could win the game on the back of it… It is commendable that even though the odds were against us condition wise, we could pull off a win today. I hope we win the toss in the coming matches,” he said.
On whether not being a regular member of the side affects his morale, Rayudu said he has adapted to the situation.”That is the situation and that is the reality. So you have to accept it and adapt to it. I keep things very simple.
The main thing is that I don’t set any milestones for myself, so a lot of pressure goes away there.”I am very happy to get whatever games I get and every game I play for India, I play it as if it is going to be my last. I enjoy watching my top-class team-mates perform and wait for my opportunity,” he said.
Rayudu said he has found a way to deal with the disappointment every time he is dropped, crediting Test skipper Virat Kohli for giving him the idea.
“When a game is on and I am sitting out, I visualise myself playing out there and what I would do. Virat suggested this to me and it has really helped me in that when I actually get a game, I am prepared, I am mentally there because in my mind I have played the previous matches,” he said.
“So, even when you’re sitting out for a long time, it is important to be mentally aware of what is going on on the field and be involved. You never know when the next opportunity pops up.
“These are good habits that are being cultivated in the Indian dressing room and if all the youngsters that are coming in adopt the same mindset it will really take the team to greater heights,” he added.