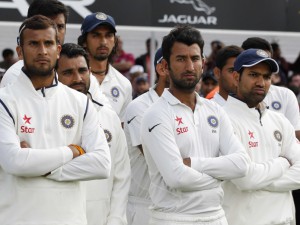 ENGLAND: India captain Mahendra Singh Dhoni on Sunday, gave an open-ended reply to a query if he was ready to quit captaincy after another Test debacle on foreign soil, losing the five-Test series 3-1 to England on Sunday.To a question that if he is contemplating resignation, Dhoni replied,”You will have to wait and watch to find out whether I am strong enough to cope with this loss or not.”
Asked if he had done enough as India’s Test captain, Dhoni gave a curt one-line reply, “May be, yes.”  Dhoni refused to believe that playing too much T20 cricket was the reason for India’s downfall. When asked if his players would choose a stint in county cricket instead of IPL, an agitated Dhoni shot back, “Ask the BCCI. Don’t be jealous of IPL.”However, after his batsmen failed in five consecutive innings, he did not mince words while assessing the poor show in the last three Test matches.
“It’s a reflection of the batting order that has not done well,” said Dhoni after the match had ended in less than three days.”Murali Vijay has done well but right from the first Test we have not been able to get a good opening partnership Cheteshwar Pujara was early to the middle because of that in the 3rd or 4th over itself in every innings. It kept exposing our number three batsman and Virat Kohli went through a lean patch,” Dhoni explained
The skipper said that once a team plays with six batsmen, it’s difficult to lose too many wickets upfront.”If you are playing with six batsmen, including the keeper it makes it a bit tough if you lose that many wickets upfront. When the lower order scored runs we made 300-plus totals and once they too got out cheaply then we struggled to put runs on the board,” he said.
Dhoni didn’t make any bones about the fact that lack of resistance was very disappointing. “Yes, we are disappointed that we couldn’t offer any fight in the last three Test matches. Hopefully, the batsmen will take positive out of this defeat when they come back here, all of them are young and good enough to come back here, and do better” he added, hoping for better times for the Indian batting line-up.
The skipper said that Bhuvneshwar Kumar, who  was adjudged India’s ‘Player of the Series’, was tired by the end of the series.”Bhuvneshwar Kumar was the only one who played and if you see his bowling in the first Test and compared to the last Test, definitely he was a bit tired but at the same time we never really had anyone who could replace him.”Others we replaced, we tried Pankaj Singh in place of Ishant and Mohammed Shami made way for Varun Aaron, who had more pace to show for.”
Dhoni said that once the batting form deteriorated, it became difficult for the bowlers to keep India in the game.”I think everybody was eager to keep performing because overseas performance means a lot. But once the batting began to slide a bit it has become tough for the bowlers to cope up because not many of them have played more than 15 or 20 Test matches and may be 8 or 10 outside the sub-continent.
“The last two Test series were of two matches and not many of them have played five-match series. But when it came to eagerness and preparation they were right up there,” Dhoni signed off.