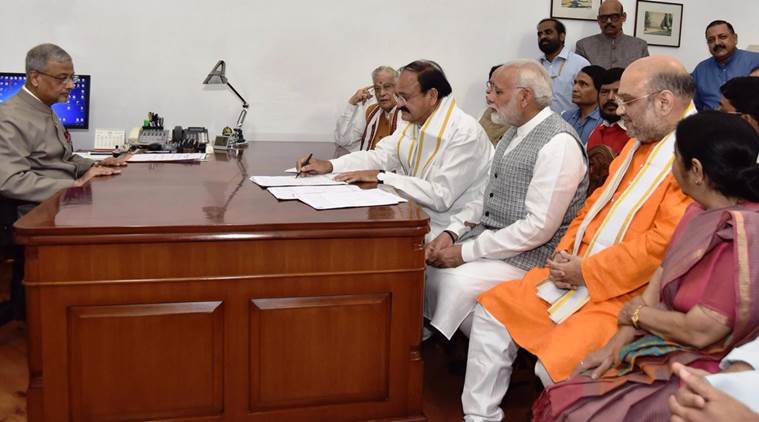 BJP president Amit Shah, senior leader Murli Manohar Joshi as well as leaders from BJP allies and those from other regional parties, including the AIADMK and the Telangana Rashtra Samiti, accompanied Naidu as he filed his papers in the parliament complex.

Mr. Naidu was accompanied by BJP president Amit Shah, senior leader Murli Manohar Joshi and other party legislators.Speaking to reporters after filing his papers, Mr. Naidu thanked Mr. Modi and Mr. Shah for nominating him.”I will uphold the dignity of the office of Vice President of India if elected,” Mr. Naidu said adding that he would look to strengthen the parliamentary democracy.

“I wanted to see Mr. Modi come back to power in 2019 and after that I wanted to resign from active politics. But destiny has other plans for me,” said an emotional Mr. Naidu recalling his association with the BJP. “I am no longer a member of the BJP or any political party now,” he said.

The BJP’s Parliamentary Board on Monday picked Mr. Naidu as the party’s nominee for the post of Vice President.The Vice President election will be held on August 5. Members of both the Houses of Parliament, including the nominated members, will be eligible to vote. The Opposition has fielded former diplomat Gopalkrishna Gandhi for the post.