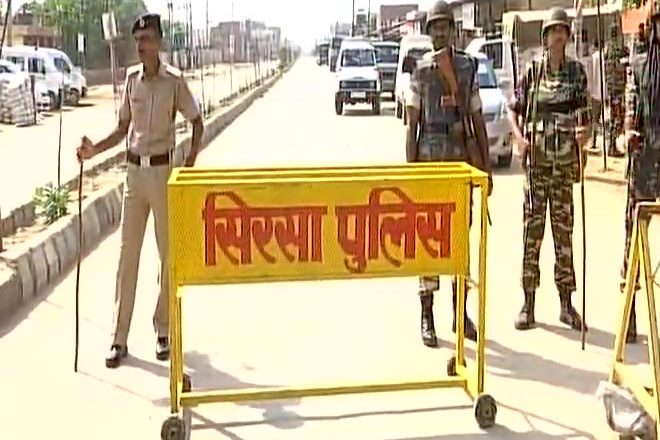 SIRSA yana): A large number of security forces and district authorities on Friday began a massive ‘sanitation’ exercise in Ram Rahim Singh’s Dera sacha sauda headquarters in Sirsa, Haryana. A government official said an estimated 5,000 police personnel and 41 companies of the army and paramilitary were part of the operation and had begun seeing deployment as early as 6:30 am outside and in the immediate vicinity of the Dera Sacha Sauda.

Earlier, Ram Rahim Singh was sentenced to 20 years in prison in connection with two rape cases. Following the conviction by a CBI court in Panchkula, large-scale violence broke out leaving 35 people dead. Apart from it, six others had died in incidents of violence in Sirsa, according to reports.

An uneasy calm enveloped the city as the State government initiated the court-monitored possession of Dera Sacha Sauda property here on Friday morning. According to a senior government official, the judicial officer, retired District and Sessions Judge AKS Panwar who has been appointed the Court Commissioner for the purpose by the Punjab and Haryana High Court, led the charge entering the Dera premises around 8 am.
A heavy security cover at the Satnam Chowk, which separates the heart of the city from the cult’s former chief Gurmeet Ram Rahim Singh’s 800 acre empire 10 km away, began giving way to JCB machines, bulldozers, trucks and other heavy equipment around 7:30 am, to gain access to Dera property “when required to be utilised,”according to a paramilitary source.

“The situation is under control at the moment and no law and order implications are expected to arise immediately; however, the whole sanitisation procedure is expected to take at least 4 to 7 days,” said a senior police official.(With Agency Inputs).